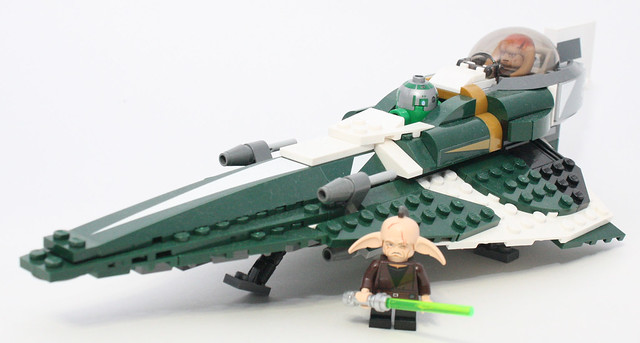 The Jedi Starfighter (Delta-7, for the especially nerdy among us) has become some sort of LEGO annual tradition, the Star Wars version of the City Police 4×4 (which shows up in Advent Calendars, polybags, and sets year after year, for those that do not collect City Sets). This year, we get Saesee Tiin’s starfighter, continuing a storied tradition of making up unpronounceable names and rainbow ships.

I suppose what I’m trying to say is that this version of the Jedi Starfighter, mostly inspired from the Clone Wars cartoons, has been absolutely done to death. What can possibly be done to make this ship unique and different at this point? It’s kind of a given that consumers are desensitized to paying for the same thing over and over wrapped up in some new package each year (see Madden Football, iPhones, Call of Duty games, all of popular television, and the McRibb sandwich), so obviously, LEGO realizes that they can get in on that game. How does our new $30 starfighter stack up?

Yet, I love the Jedi Starfighters, both the Eta-2 and the Delta-7 line for some reason. I own all of them except the Ultimate Space Battle, and bought multiples of them to store and keep parts around. I can’t explain why a set I’m so critical of intrigues me so, but I can at least try to review the set. And I’m going to set the tone of the review for this guy pretty early: this is the best version of the Delta-7 Starfighter LEGO has ever made. 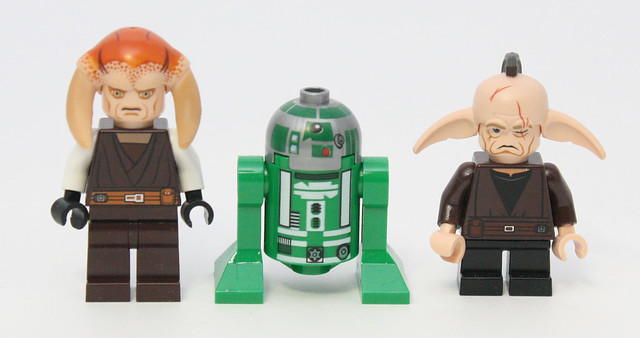 We get three minifigs in this set, and LEGO continues their insidious practice of getting us to buy rehash sets by throwing in a new version of a droid. LEGO is most certainly run by Sith Lords. I mean, would anyone have picked up Plo Kloon’s starfighter if it didn’t have that wonderful little brown astromech droid? Of course not! Mace Windu’s fighter included some extra droids that mostly justified the higher price, and it also had a BAMF Jedi in it, so worth it, but these new astromechs are usually a sure sign that a set is a bit of a stinker and they want us to buy it.

First up is the set’s namesake, Saesee Tiin, a Jedi Master that I know next to nothing about and don’t really want to hit Wookiepedia to learn about. Sorry guys, but I enjoy my blissful ignorance of the Clone Wars. I do know that he was firmly in the “unable to do the most basic fighting faction” with Kit Fistoo and Agan Kolar, since he died red-shirt fast when they went to arrest Palpatine. 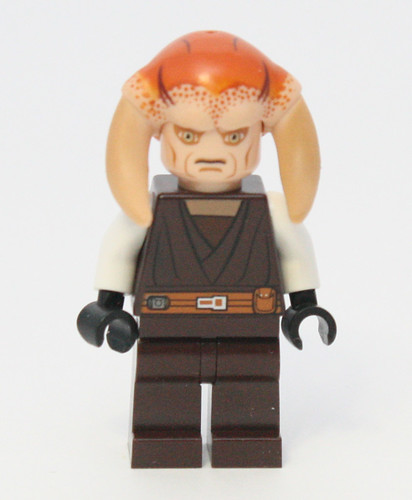 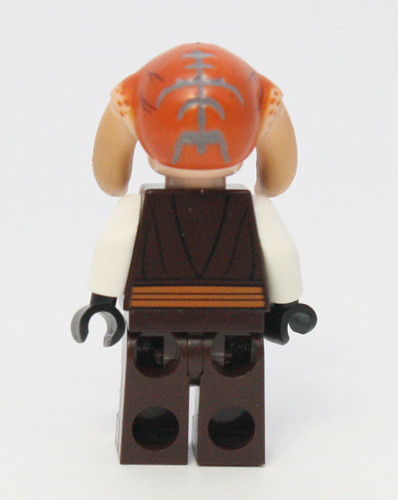 We already had this Clone Wars version in the Jedi Shuttle, and this figure hasn’t changed (the Arrest figure features darker clothes and a regular face). 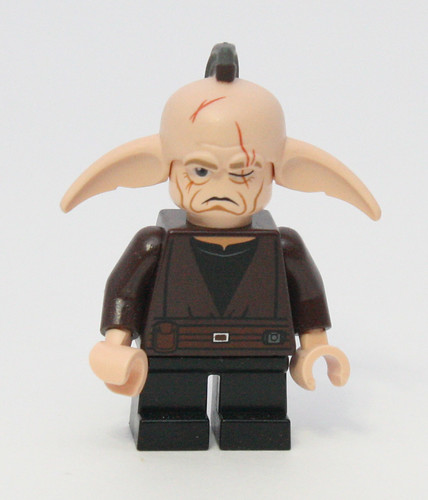 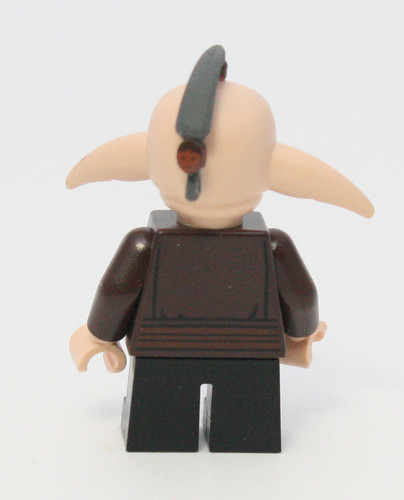 Next up is Even Piell… and I’m not even going to make a joke about that name. But I will remark that for some reason, when I look at this figure, I can only see Edward James Olmos. Take off those ears and put some salt and pepper hair up there and tell me you don’t see it too.

That or this could be Yoda’s evil twin… is that stuff around the mouth a goatee or just detail lines? Definitely evil twin if that’s a goatee.

For the hook, the astromech droid, we get R3-D5, one of the two-hundred or so R3 droids that exist in the Star Wars universe (at least given the numbering scheme… not a lot of Serial Number options with just one letter and one number to choose from). 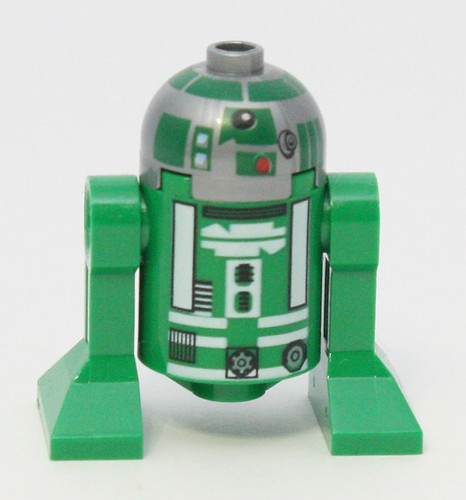 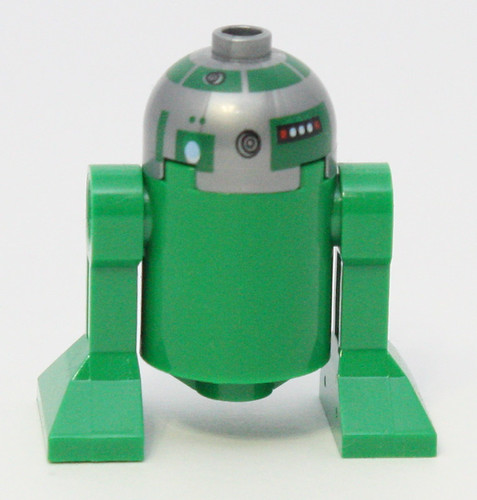 There’s nothing special about him, truth be told, but much like putting a hat on Malibu Stacy, any collector has to have him. It’s the new printing style, and the green works well. Of course, it’s very green, instead of dark green, so he comes off very plastic and cartoony, but we already have a dark green astromech.

Now on to the ship itself. This is the first set in years where the minifigs are honestly less interesting than the ship itself (or at least don’t add value to an overpriced set). We’ve seen the JSF done a few times, after all…

Sorry for showing off the side of my box there, but there wasn’t really a better way to try and position these things. Obviously, Obi-Wan’s is the one that stands out, both for its age and being a different style. The rest are all Clone Wars style, and more than any other set, try to capture some unique elements to the series. And that’s one of the biggest problems of the Delta-style JSF… it’s just not that exciting of a design. Sure, it looks sleek, but it looks like every other sci-fi ship of the last couple of decades. The OT ships were cool because they didn’t look like planes (for the most part), and its what made them so iconic. 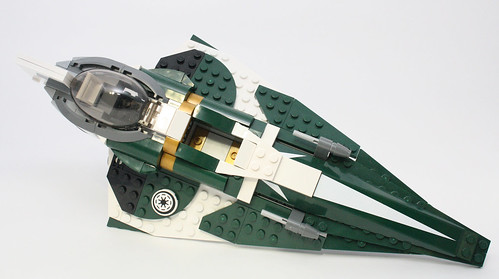 That’s a failing of the source material though, and not the model itself. Like every other JSF, it’s the wing design, cockpit at the big, small steering wing and that long, tacked-on nose. Where this model sets itself apart is HOW it achieves that. First, this ship, unlike all of the others, does not use a bar with the big flag. Originally, these were colored and/or stickered, but that died off quickly. Here, we do get some stickers, but with a couple of plates added around the cockpit edge. 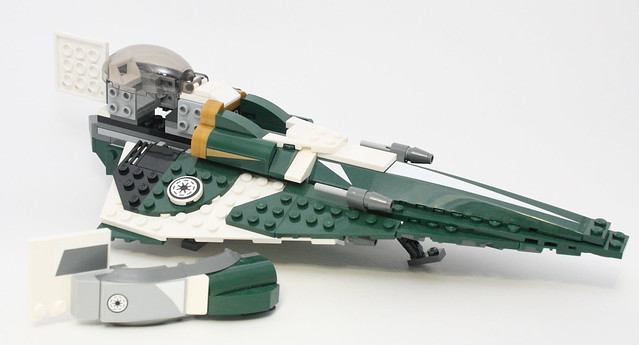 From a building point of view, this is just fantastic, and so different that it gets you excited for the rest of the build. The set does use stickers, like the other JSF’s did (save Ahsoka’s and the original), but it uses them so much better. Look at that top picture above and how stickers only accent the front nose cone, but brick choice for the top of the wing creates the rest of the color and swoosh of the white. That is just beautiful. Or how the little bit of gold blocks make the sticker just accent the shape of the ship instead of screaming STICKER at us. Even on the slope, it blends. While Space Invaders is still my favorite sticker, this is probably the best use of them in a Star Wars set.

Speaking of that cockpit section, it uses hub fenders to great effect, something that was teased at in the battle packs as railings for guns. This effectively hides the gap created by not building a place for the glass, and looks wonderful. This is the first time LEGO has really tried to hide those gaps, and I hope to see it show up on a lot more ships. 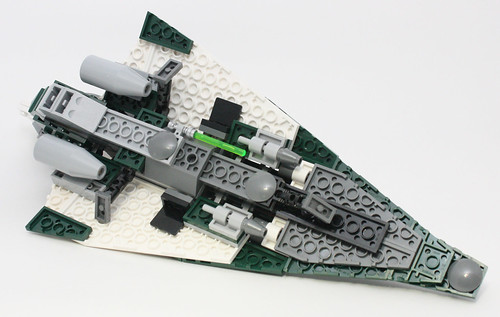 Even the use of flick-fires, positioned on top, set it apart. It wouldn’t be hard to do a little bit of modification and put some guns up there instead. On the bottom, we don’t gear nearly as much detail. The over-complicated launching mechanism from Mace Windu’s fighter are gone, replaced with minimal flick-fires. Yes, flick-fires still stink, but I’m a lot more forgiving of them taking up only 16 parts in the overall set vs. 40. The top-ones are new to this version, and actually connect from a technic piece on the underside. The engines are just on the back, and there’s not much to see.

This version of the JSF really threw me for a loop when I first built it. I did not have high expectations at all, especially since I built this right after I’d wrapped up the Sith Fury. But after putting it together, I had to go and build all of the other versions, just to try and show off how much they’d improved the overall design. 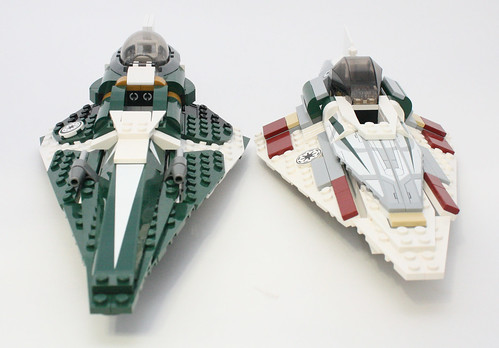 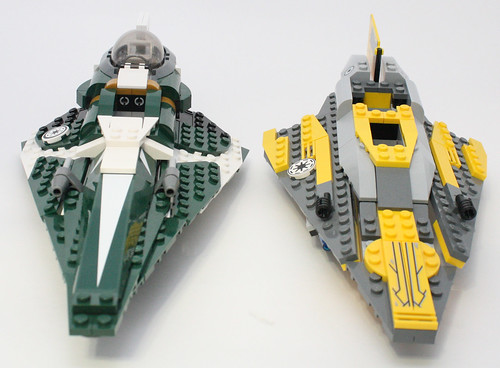 Previously, I’d always looked at Ahsoka’s as the definitive version of the JSF. Mace Windu’s had too many stickers and Plo Kloon’s had too much awful, but the bar has been reset. This set makes me want to go back and mod all of the older versions to match the new aesthetic. Vader’s TIE was the last set that had me wanting to do that (and the new TIE Fighter gave me the canopies I needed to do it.
In the end, we’re given a very worthy update and redesign to what has become our most familiar ship, a $30 price point that’s actually pretty easy to swallow, and some minifigures that remind me of Edward James Olmos. That’s a win all around. If every $30 set delivered like this one did, I think we’d be willing to swallow the price increases a bit easier.

Fun to build, and some new building methods that really improve the set
New build methods improve what has been a very stable and predictable design
Stickers used as accents instead of the focus
Color and piece choice make the ship really work
Selection for parts we don’t like (flick fires) make the ship moc’able

Minifigures are somewhat boring
Accent stickers are small and can be tough to apply
Please reprint the Republic insignia tile, it’s used a lot
I need to buy a lot more parts to retrofit all of my old Jedi Starfighters now…
Verdict: Buy it.

I love the dark green colour ...
must say ... I could swoosh this around for hours ...
it looks well balanced and is appealing to to eye...
the mini-figs are okay ...the little droid is kinda cute....

does seem Lego is going for a "droid of the week" type thingie ..lol
they have out how many different ones now ....10 ?? less/more ...but I do have to say I really like those little trash cans ...heheheheh

kinda; though its closer to a droid of the month thing

ive lost count; i think 20 or so now though i haven't checked in a while

they are cute thats for sure ... I really liked that teal blue colour they had for one...very different