The ARC-170 is possibly my favorite ship to come out of the Clone Wars. Even though it didn’t get a lot of screen time in Revenge of the Sith it left enough of a good impression to warrant a redesign a couple years ago (OK, maybe the CW cartoon helped a bit).

First let me say that I never picked up the first version of the ARC-170, despite the fact that I like the ship. They just didn’t get it right in my eye. This starfighter’s appeal, to me, is how it pulls off the retro Rebel fighter look while being a clean modern design. It’s a sleek beast of a fighter and the older set didn’t really convey that well. Thankfully, this one did. 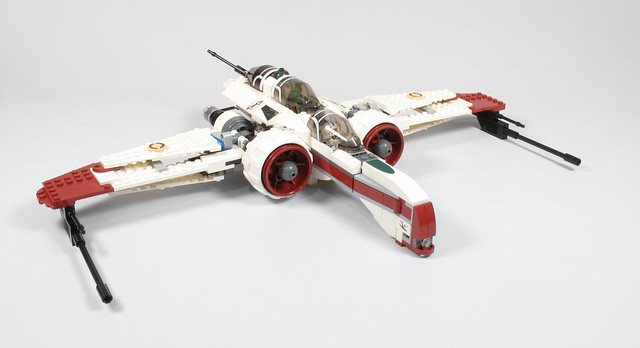 See what I mean? Nice sleek look, just as it ought to have. The bracketed stripe along the fuselage looks great and the SNOTed slopes round off the nose cleanly, unlike the older model that used sideways plates and failed miserably. The body panels around the cockpits are integrated well and the stickers look good (but they’re still stickers). The main canopy has some noticeable gaps, key of which being directly behind it. The one right above it needs that room to avoid trapping the pilot if his backseat driver hops out first so it can’t be helped. 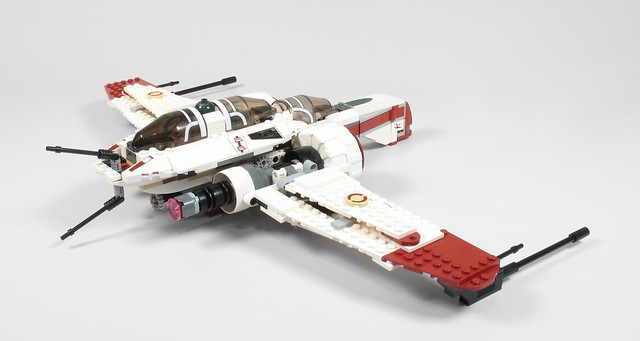 The wings are impressively wide, and thanks to new parts since the old model they’re appropriately radiused. The under-slung guns look good & foreboding though not as accurate as I’d like. I can deal with it since the look is hard to nail at System scale (on that note, I would love to see a UCS ARC-170… You listening LEGO?). The rear gunner station could use some work, but again, it’s improved over the old set. The over/under connection is a fun feature but it can sort of get in the way… I’ll get back to that in a minute. 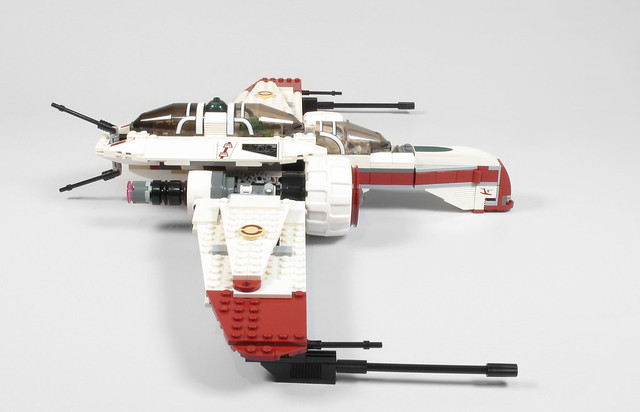 Overall the construction is pretty straight forward, no real surprises or weird landing gear like the V-19 had. That being said, it doesn’t actually have landing gear. That’s not a complaint. Just a point of interest. The underside and nose are in line and the blasters hold the wings level so there’s really no need. Just don’t try to park it with the S-Foils open (but we all knew that right? Only rookies attempt landing in attack configuration). 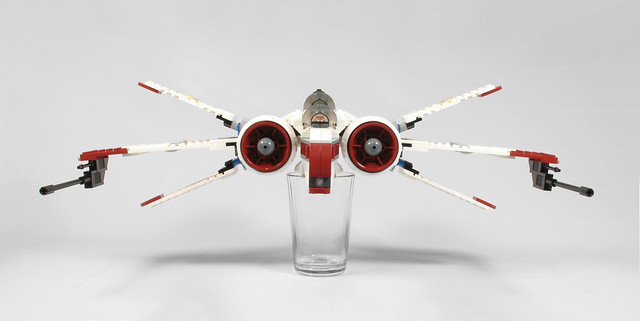 Speaking of the S-Foils, they work pretty much like the X-Wing sets: turn a Technic gear on the back to engage the hidden worm gear inside the ship and T-bars spread the little wings thanks to a slot in the main wing. It’s slow, but it works. The wings themselves suffer from the same droop issues as almost every other plate-wing starfigter, but considering the huge cannons on the tips and the big hole near the middle I expected much worse. Also, that gear is set up to slide back and forth, because hiding on the underside is everyone’s favorite play feature: flick fire missiles. The idea is you push the gear rod forward to launch them… but I think the feature planning only got to that stage, because they are literally right behind the nose. Either that or the set designer knew that those completely suck and being aimed directly at a fixed portion of the ship is an irrelevant detail but was required by contract to include them.

OK, so about the rear gun getting in the way: you know that little gear for the S-Foils and missiles? Yeah, guess where it is. 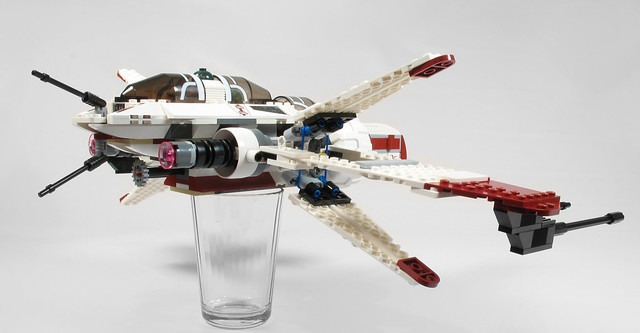 So that’s inconvenient. Also, when I grab this thing and swoosh it around (because we all know that’s the real reason to buy starfighters) they flop around wildly since the pivot is fairly loose. Given this, I think the set would be better off without the lower gun.

Now, who do we have to fly this sweet ship? 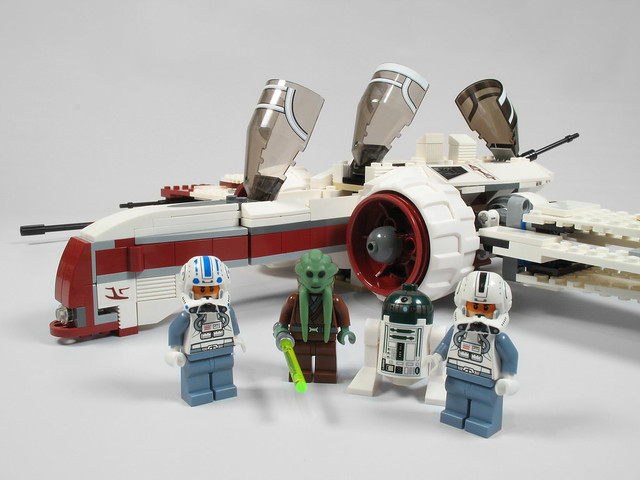 Who else than Captain Jag. I had no idea who that was to be honest, but with a name like Captain Jag I think it’s safe to assume he has the situation under control. Manning the rear gun is another generic Clone Pilot who clearly isn’t cool enough to be named, unlike Captain Jag. Up in the droid socket is R4-P44, a typical looking astromech with a dark green dome and highlights. Please, do not get me started on the inappropriateness of giving a domed astromech an R4 designation, I didn’t name the thing. Lastly, Kit Fisto is tagging along, I can only assume this because he’s green too and Jedi like to color coordinate with droids. I’m not complaining though, I’ve liked that tentacle headed alien since his crazy toothy grin in Attack of the Clones. So together I’d say that’s a pretty nice set of minifigures and those new helmets are slick. My only gripe is the lack of guns for the pilots. Captain Jag must just bee too cool to use a blaster and insists the same for his crew.

Retail price is $59.99 and for that you only get 396 parts. That’s pretty steep at 15.15 cents per brick. I know that sets across the board have gone up but I still judge sets against the golder rule (10 cents per brick) so despite the cool figures and cool ship I’m simply not satisfied with the price point. Maybe if the canopies were printed I wouldn’t complain so much (honestly, stickers on transparent elements and stickers on round elements are both terrible ideas – but at the same time? Really?). Oh, and just for reference, the old ARC-170 model from 2005 with the same piece count was $39.99. So there’s that. All things considered, this is a great set. There’s always room to improve on official designs and I’m sure I will always complain about the price of sets. 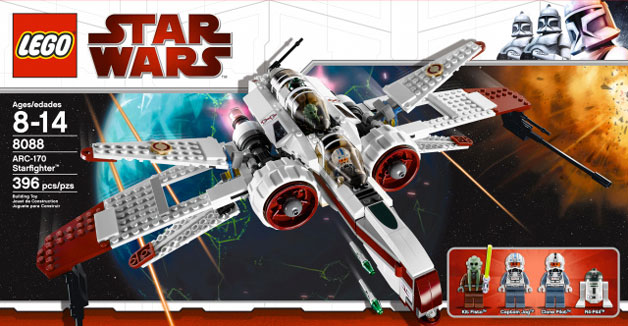 so this one's a bit pricey per piece count.....bummer

play value looks moderate..this would be something I'd get for the "older teen/adult crowd" .....think a younger child could end up breaking this rather fast ...