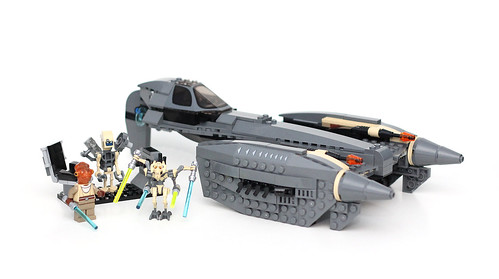 The ship itself is a redesign. The first model [set 7656] came out in 2007 under the Revenge of the Sith theme. This upgrade is larger and more detailed than before; boasting almost twice the piece count, though at two and a half times the price. The additional playset scene with accompanying Mon Calamari Jedi and droid assistant certainly helped bump those stats a bit, but the starfighter itself is clearly an improvement. Unfortunately, I don’t have the old model to compare them side by side.

Grievous’ starfighter, nicknamed the Soulless One, is a modified Belbullab-22. It reminds me a bit of the the Magnaguard Starfighter, so much so that I mistakenly thought they were both Utapaun ships. I particularly like the style because it feels like an old hot rod. Very sleek and powerful feel to it, the streamlined nose and engines like the hood and fenders off vintage mobster car. And from the front, it just looks mean.

Mixing a bit of functionality with the wonderful form, this ship has a rotating lower tail fin that helps support the ship while grounded. 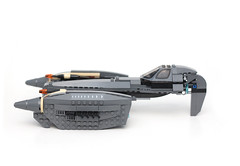 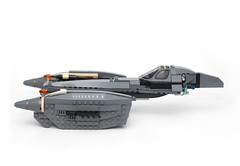 I really like that they kept this detail on the model. With no actual landing gear to speak of, that does the trick. I thought the part usage around the end was pretty clever as well, with the flag elements creating a nice taper at the back, hiding what otherwise might have been an awkward gap. This version also sports some new play features that you missed out on in the old set. I don’t think I’ll ever be a fan of flick fire missiles, I’ve just accepted that they’re required for all sets now so the best I can hope is for the designers to cleverly conceal them in in a way that doesn’t detract from the model, like this: 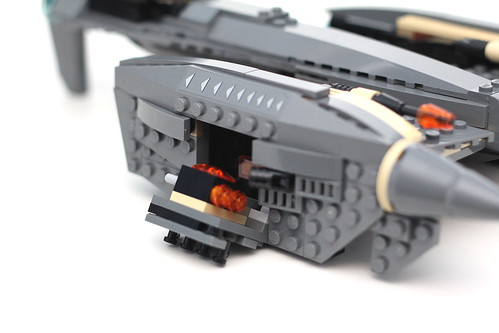 A fold out compartment that is perfectly integrated with the design of the ship? I couldn’t be more pleased with that detail. In addition to those retractable weapons and the guns up front, the fighter is armed with a sizable missile clipped underneath. A very nice alternative.

Now, I want to show you what really impressed me about the set. As I was building and I came across this part I was very confused. If you look in the cockpit here, 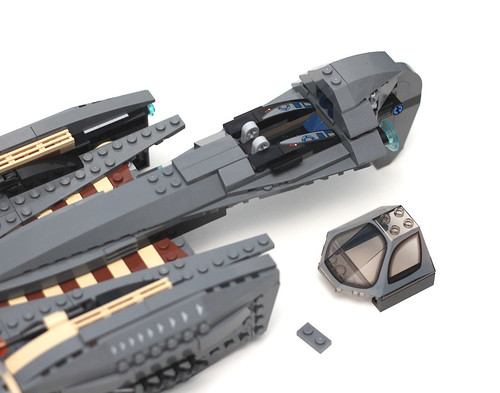 you can see two thin Technic lift arms, positioned right where you might expect a control yoke to be, and they’re only connected via a flexible rubber gasket. I’ve never seen a LEGO starship with anything like that so I knew something very crazy or very clever was at work. As it turns out, those are positioned just under the edge of new canopy so that when you slide it back into place, they click up into the area studs would normally go – locking the cockpit closed. 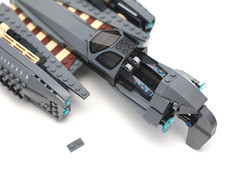 Absolutely brilliant. When that came together I was in awe. Oh, and by the way, that windscreen is printed. There are stickers for the controls inside the cockpit and for the vents on the engines, but where it really mattered they came through.

Now, since this is a Clone Wars set and the original was based on the movie, the Grievous minifig has been updated as well. All newly designed parts, each of which painted to give the figure some depth this time. 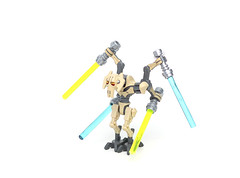 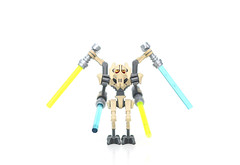 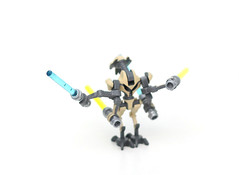 The face looks fantastic and overall I really like the style, but there are some issues… mainly, he’s just too small. I know minifigs constantly ignore the concept of scale, but for a specialty droid like this and as a key bad guy they should have pumped him up a bit more. Also, the neck is fixed at a bad angle. It’s on a clip similar to a standard battle droid but it only has 90 degrees of tilt and the spine comes straight out the back of the skull, basically making the hinge worthless because any position other than all the way forward looks odd. Lastly, the arms have a habit of popping off when moving them. The clips appear to be more U shaped than C shaped. I suppose they changed this to prevent breaking, but at the cost of grip I think they still need to work on it. One more minor complaint, you need to remove his secondary arms to fit in the cockpit and there isn’t any convenient place to store them. 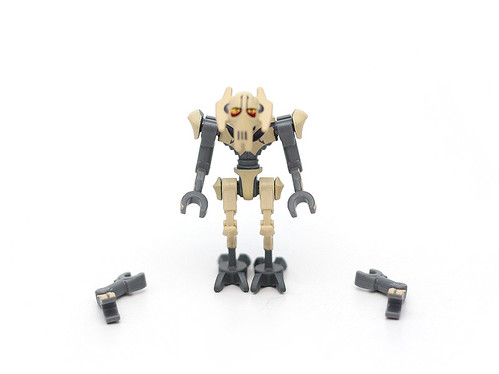 That covers the core of the set, but you also get a little scene that to anyone not following the Clone Wars cartoon might seem unusual… 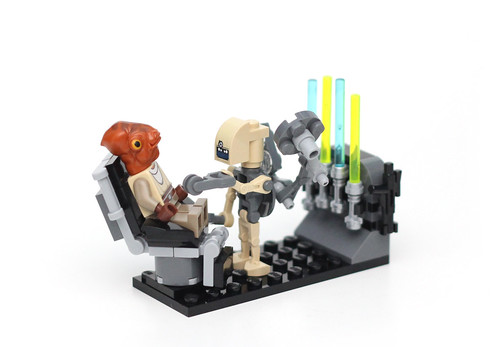 The impression one might pull from this is something along the lines of “Ackbar at the dentist”. Now, I had actually seen the episode, so I knew what was really going on here: the captured Jedi (who certainly isn’t Ackbar) was being tortured by one of Grievous’ underlings. At least that’s what I thought, but when I read the summary of the episode it turns out that didn’t happen at all… it should have been the General himself in the chair getting his legs reattached after a fight with Kit Fisto. Frankly I like my version better though, or the dentist idea even. It’s not a bad little setup, it just feels like it was needlessly included with the starfighter to drive up the price. At least the figures are interesting and you have a place to store Griveous’ four lightsabers while he’s piloting his ship. There should have been a bar on the back to hold is extra arms though. 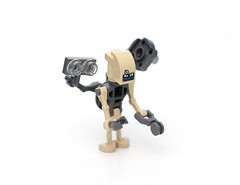 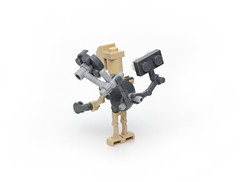 EV-AD-4 is Grievous’ personal repair droid, and LEGO did a fair job on the figure. I would have liked a printed slope for the face, and he’s a bit hard to balance, but without molding any new parts there isn’t much else they could have done for him. 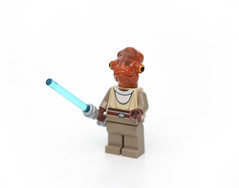 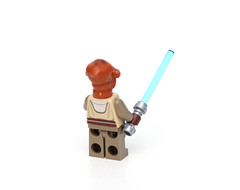 The Jedi goes by Nahdar Vebb, and he’s a former apprentice of Kit Fisto (who would have made another nice addition to the set). The double sided torso is nice. Simple and slightly different from the typical Jedi tunic style.

What I liked:
The ship is a great build and has a lot of useful parts. They included the flick fire missiles for people who like them, but hide them for people that hate them. The locking slide mechanism on the canopy is genius. The new Grievous looks great* and the new Jedi minifig is more than welcome.

What I didn’t like:
*While Grievous does look great, he still should have been bigger and better engineered. Beyond that, the “command chair” playset section is superfluous and I’d rather this just be the ship and Grievous to drop the set to a lower price point, or toss in Kit or even one of Grievous’ assassin droids from the episode to help make up for the price.

that is one cool looking ship ...
lol..yup ....I think the "dentist" scenerio is a much better one..hahaha

idk how long you would play with it before getting bored/tired; but i guess i could try to find out

to bad these are not on the store shelves still .....but then ..lego does love "re-issues" don't they ....haha

thats a really long shelf life; hasbro keeps their stuff on shelves for no longer than a year

yep; basically just long enough for people to spot them and push them into buying it if they have interest