Series 2 of the Planets went classic, with each planet representing one of the three movies of the original trilogy. As an OT purist, I had to pick up the lot. For the record, so far they've made three planets, two moons, and a moon-sized space station. Maybe we actually shouldn't refer to these as planets.

Semantics aside, let's have a look at the first chronologically and numerically, 9677 X-Wing Starfighter & Yavin 4. Can you get more iconic than the Battle of Yavin? The climactic space battle from the original Star Wars. Last wave we got a Death Star, so now we get the other side of the conflict. A Rebel pilot and his tiny X-Wing, ready to take on the Empire's glaring design flaw. But he'll never forget his micro-scaled roots with that big green sphere prominently displayed next to him. 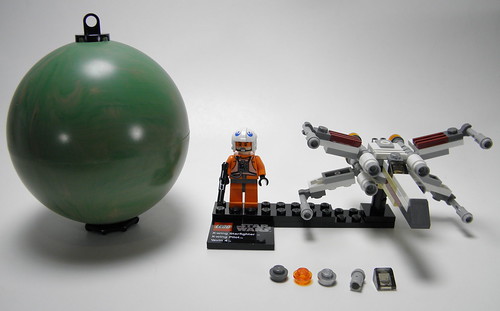 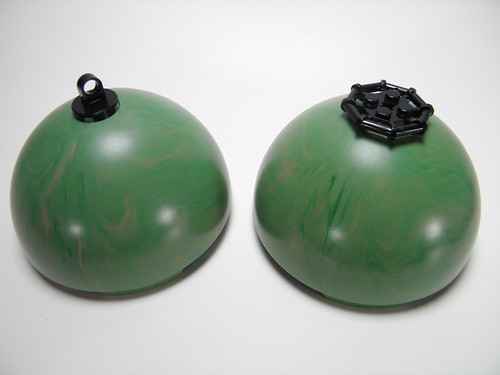 Yavin went with a swirled plastic approach rather than a printed sphere as most of the planets have been thus far. While that may work for a gas planet like Bespin, Yavin was a jungle moon. I think it would have been much better printed.

Pretty good parts pack. Bleys, some white, some black, and dashes of tan and dark red. The newer clip hinge plates are always nice. Wish you got four of those dark red grill tiles as there are four wings on an X-Wing. I initially didn't like the idea of flick-fire missiles, but I've grown to found the element very useful for exactly what they're used for here. As with all planet sets, you get a printed 4x4 tile for the stand. 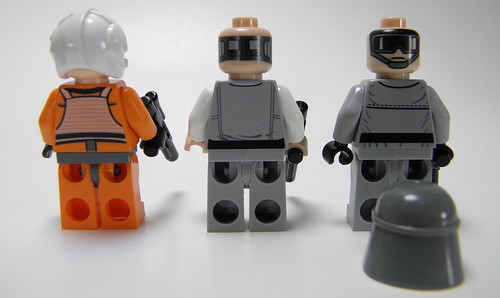 But that Rebel pilot... It's just Zev Senesca (left) with a different helmet. Not even a new helmet. Compared to the highly-improved Lobot (center) and AT-ST driver (right) in the other series 2 planets, he's just a big pile of disappointment.

Not only have they not fixed the color bleed problem with his vest print, they didn't even give him a new helmet print. Same old generic blue Rebel symbols. Yes, that was a common sight during the battle of Yavin, but there are a ton of untouched Rebel pilots they could have made this instead. They could have at least added more detail to it, like they did with Luke's helmet this year. I can understand them wanting this to be a generic pilot, but if Bespin comes with Lobot, then Yavin could have Red Leader, or someone specific! Since the minifigure is a major selling point for Star Wars sets, I really wish they'd have put a little more effort into this one.

The X-Wing model is awesome. I still think they should be grey, though the actual models were a very light grey and it's a toss-up. Nice representation of the ship while keeping the parts count low. There are a couple of cool build techniques in there, like the use of antennas as both the engines and the means of attaching the wings. Also the transition between two studs and one stud wide is clever. I like the use of a silver 1x1 plate for the astromech to distinguish it from the ship.

Anyone who bought the 30051 X-Wing Fighter polybag is in for some déjà vu. This model is identical in every way, save for the new "Slope 45 2 x 1 with 2/3 Cutout" replacing the exact same shape made by a 1x2 plate and a cheese slope. If it ain't broke, I suppose. It's a sweet little model.

VERDICT: Wait for a sale.
So we have a less-than-stellar representation of Yavin 4, a minifigure made up of now-common elements, and essentially a re-release of a polybag set. This one's for completionists or people who don't have any of the components already. If you don't have this stuff already, you're in luck. For $9.99, it's not a bad deal. I think these would have been better at $7.99, but $9.99 for this set isn't as insane as some other Star Wars prices these days. I'm not saying this is a terrible set. It's just a disappointment compared to what it could have been. It'd make a good army builder/ parts pack on clearance. What to do with all those extra Yavins is up to you.

I do like the planet its self though ...lol

um; he has been in 4 sets(2 hoth, 1 advent calender, and one from the early days) and hasn't been updated at all(other than the change to a flesh color)

poor guy ,,,just the change to flesh colour .....I feel bad for his bordom...lol
they really should have put in a small bunch of stickers to make him a little different if you felt like it....one to go down his helmet ridge would be fine or a bit of an arm band ....in fact they should put such a sticker set in all sets...that way you can make sure your sibling with the same set does not take your figs and break them like they did with there own .....heheheheh

no stickers; give us printed helmet and gear options