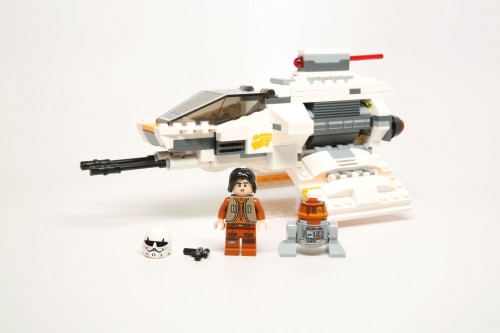 This thing is a piece of crap. 1 out of 5 stars. There. I’ve said it. And I’m tempted to end the review of 75048 The Phantom right here and now so we can all go about our day because this set is barely deserving any more attention than that. But that wouldn’t be right and I’m sure you’ll want to know why I hate it so much. So I’ll do my best to tell you exactly why.

There was about a week’s worth of time that passed between me building the set and me sitting here writing the review and during that time I was able to distill my feelings down to two coherent thoughts. The two main reasons why I hate this set are: 1) It’s ugly and 2) It’s not worth the money.

In terms of its aesthetic quality, I can’t really blame LEGO entirely for its design. After all it is based off a ship in the upcoming Rebels cartoon. A very specific function was required to be included in the set, namely for it be able to dock with 75053 The Ghost, along with trying to get it to look like the source material and at the same time trying to hit a very specific price point and/or piece count. I have no doubt that the end result is extremely faithful to the original model from the show but unfortunately for us that end result is just not very pleasing to look at. 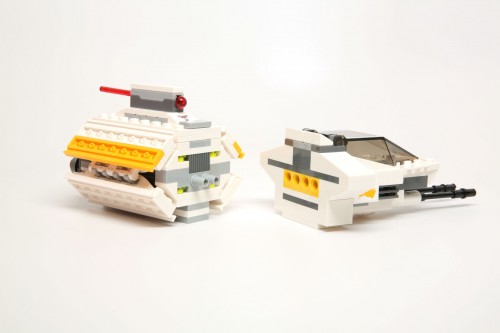 The Phantom is basically made up of two parts: a forward cockpit section and a cargo/wing section that attaches to the cockpit section by way of some Technic pins. That step in the instruction manual is highlighted on the back of the box as if it were a play feature. I don’t think it is though, like I don’t think it’s supposed to separate like that during play and I doubt that the ship in the cartoon is designed with that kind of feature. Maybe it was included on the box simply because the ship is so boring it needed something to make it look more exciting than it actually is. I suppose if I had more of an imagination, I could see the separate sections as two distinct vehicles but come on, it ain’t no saucer separation. 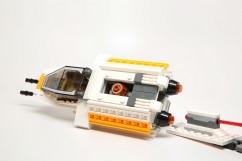 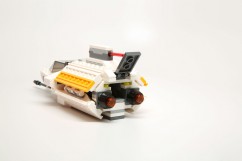 Chopper tucks away in the cargo hold which is a bit of a departure from how we’re used to seeing astromechs in these kinds of sets. It isn’t a starfighter though so it’s understandably different. Behind Chopper’s bay is a small storage area perfect for Ezra’s head accessory and blaster. I always appreciate any effort the designers put in to designing a ship with storage to store any extra bits so it’s all kept together, minimizing the risk of losing pieces. This is probably my favorite feature and one of the best features from this set.

The Phantom has these articulated wings that fold up and down depending on whether or not it is docked on the Ghost. When they’re down they angle downward but there isn’t enough friction to prevent the wings from flattening out once you put it down on a flat surface after a session of swooshing. It is quit swooshable though and the spring loaded missile adds a bit of fun. 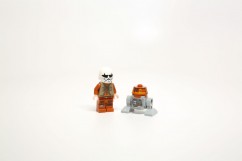 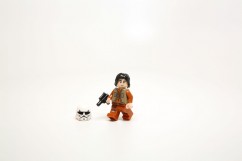 These are the two minifigs you get. Ezra Bridger comes with what I assume is a McQuarrie concept designed Stormtrooper helmet. I Googled around for images of the his Stormtrooper concept art but couldn’t really find a matching image for the helmet. It seems a bit out of place since Ezra doesn’t come in a Stormtrooper outfit but I will give LEGO the benefit of the doubt and assume the helmet has some sort of significance in the show to be included in this set. Chopper is, I guess, the R2 of Rebels, with a proper designation of C1-10P. He is shorter than LEGO R2, featuring a smaller body and legs. He comes with a 2×2 boat tile to round out the bottom.

And that’s pretty much all there is to 75048 The Phantom. And because Google doesn’t really register 0 ratings, I am forced to give it a 1 out of 5 stars. Look, it’s not like it’s a set that requires knowledge and familiarity of the source material. There just isn’t much going on with the ship. It’s small with folding wings and comes with a minifigure, Ezra Bridger, and an astromech droid, Chopper. Even if, and this is a big if, Rebels becomes the next best thing after the Tartakovsky Clone Wars and we look upon the series fondly with nostalgic eyes, it might be bumped up to a 2 at best, maybe a 3 but that’s pushing it. In its current context though, the design just isn’t very aesthetically pleasing enough to get anything higher than a 1.

And that other reason I rate this set so low? The price. It’s a total gimmick on LEGO’s part to sell the two ships separately rather than include them together in one bigger set. I would normally applaud such gimmicks just to introduce a new kind of modular play and a different building experience than what we’ve had for decades, but the execution here is lacking any real value or appeal. 75048 The Phantom costs $25 bucks. Think of all of the other sets you could be getting for $25 dollars and you’ll quickly have the same realization that I did in that it’s just not worth it. The only reason anyone would feel like they need to get the set is because they want to buy or have already bought 75052 The Ghost and want the Phantom to complete it. LEGO should have just bundled it into one set for a few dollars more. There’s a 2-in-1 pack floating out there for $5 dollars less than the cost of the two sets combined, and even that is seems a bit overpriced. If I didn’t have to review this set I would have taken my money and doubled up on 75003 A-wing Starfighter instead. Or, better yet, more space marines.

hummm..not much there ..is there...
at least it is swoosh-able ....it has that going for it...
it is a bit disappointing to look at,,does it at least have a somewhat reasonable price considering the play value per $$ ..??

not unless you buy that other set like i did

no real value in that set without the other

oh-my ...it's one of "those" type ..have to buy the related set or all you have is an item to build then look at ..then take apart and build some thing else with it to play ..like twin mini forts ...robot vs human ....lol(I actually would do that heheheh and shoot pennies from side to side whom ever looses the most fort-bricks.. looses the battle)...