There is nothing more absurd in the Star Wars universe than the idea of a walker as an effective and terrifying weapon of war. Not midichlorians, not Gungan fart jokes, not the idea that a bunch of Gummy Bears defeated an Imperial battalion. Not even the fact all it takes to redeem someone who spent a few decades murdering and torturing everyone he could find, including a whole bunch of children and more than a few officers, is a single action of not being a jerk and turning your murder-y tendencies to your boss (really, who hasn't had that temptation before).

Walkers are structurally compromised, they put the pilot often out in the open or in an exposed place. It's true that you always want the high ground in any fight, but it's not so true that you stand on top of said high ground and hold a big banner that says "put lasers here" and expect to win. After all, those Ewoks managed to fell these walkers with the basic arsenal of any elementary school kid that's looking to play a prank on a friend.

Yet, knowing all of that, I loooooooooooove me some Walkers. Sure, the B-Wings, A-Wings, and X-Wings are all cool (Y-Wing, you get back in your room and you stay there), but when you're a little kid, something about the menace of an AT-AT walking towards you, blasting everything, is just awesome. Sure, it was eventually taken down by a jump rope, but it was still awesome.

The AT-RT set from the beginning of this year is the latest in a long line of expansions of the idea of the walker that came with the PT and Clone Wars. In the movie, these were seen in Revenge of the Sith as delivery mechanisms for jedis to get fragged, but were still cool. This is the second version of this particular walker (the original was 2005's "Clone Scout Walker"), and is considerably bluer and more sticker-y than that old version. It's also twice the price, about 50% more parts, and distinctly more Yoda. The real question is would something like that be worth it?

We've had a glut of clone-oriented walkers in recent years, as they're the backup "thing" to put into a set when LEGO needs to justify either putting together so many Clone Troopers or sticking a higher price tag on something. Speeders are probably the primary (in both the 2013 battle packs, for example). The last regular Clone Battlepack had a little walker in it. The elite clone pack from last year put legs on a canon. The first set for 2014 was the AT-AP, and we got a new AT-TE this year (review coming soon).

First up is our friendly neighborhood future child murderer, the 501st Clone Commander. This is actually a pretty big deviation from the existing clones, and looks much more stormtrooper-y than previous clone designs. By design, I'm certain. The helmet is different for him, so expect to buy a lot of these sets on sale to build that 501st legion. At least it's cheaper to get him here than in the Z-95, and this set has been on Rollback at Walmart multiple times for around $16 (similar prices have been seen at Amazon whenever it happens). Under the dome, it's the clone minifig head. Really, this figure is defined by the blue accents, unique(ish) printing, and different helmet.

Yoda isn't all that strikingly different from earlier versions, save the hair-color. I know this probably puts me in the minority, but I actually quite like the CW version of Yoda, at least compared to other versions of the figure. We get a new one with the Geonosis Duel set for non-CW and it looks awful).

Our Commando Droid Captain is all of those things, I suppose. There's really not much to say about these guys, other than the torso doesn't like to sit straight in the bottom clip, and like all battle droids, they're fragile.

We also get another new Droideka, which we probably needed, given how bad the last few attempts at making one of these things has turned out. I have several of the originals, from that little Jedi Defense set that was on clearance at KB Toys until they went out of business, I think. This one, apparently, is a "sniper" variety because... you know what, I'm not even going to try and apply any logic of putting a sniper weapon on what is effectively a little rolling armored tank. Whoever thought this one up doesn't understand battlefield roles or warfare in general. This is like putting a Barret 50-cal on top of an M1 Abrams tank, in place of the turret. Since the original, there have been three other versions of this; one with the 2007 MTT (which looked cool but fell apart easily and couldn't stand up), the 2011 Naboo Fighter, and the 2013 Battle Pack with Clone Troopers vs. Droidekas (again... review coming soon; notice a pattern)? None of them have been perfect. The originals were stable but didn't really look like... anything (they were great for grey droid arms though). The MTT version was a huge upgrade in looks and a huge downgrade in almost everything else. It did give us that tri-pin technic piece though, which still hasn't showed up in enough places. This one is more of a hybrid between the 2007 and the battle pack version, with a lot skinnier neck and a taller "head." It doesn't have the expand/contract ability of the others, and still can't go into a ball and roll around.

I can't really say much on this, good or bad. Droidekas weren't exactly featured in anything other than Episode I, and in that, they were mostly a heavy. As a build, this one is a decent improvement, but it's not as cool as a Battle Droid or a Super Battle Droid. It's more stable, it has a bulb on the bottom, and there is a big long barrel sticking out its chest. I stand by my crack above about turning this particular droid into a sniper. 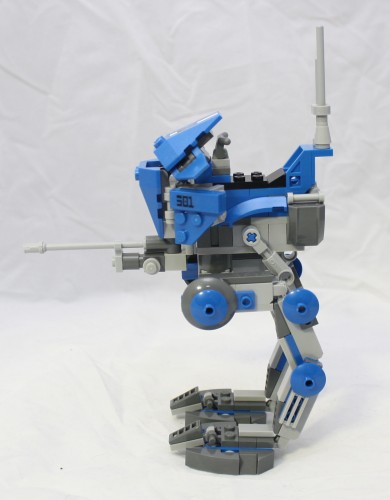 The walker obviously looks quite a bit different from the old version... eight years and thousands of new parts can do that to a build. It's taller, the feet are brick-built (instead of just a tube slope and a couple of plates), and there's a lot more structure to the front. It's patterned after the 501st, which means blue (and presumably youngling tears). The wrapping around the cockpit is a bit involved, and the side flares especially are prone to getting knocked off. The walker also isn't nearly as poseable as the old one is, since the only way you can really keep it upright is to keep the legs in the position you see above. The old one could be put into a walking position and still stay upright. This is a fine little walker, and the feet in particular are great compared to previous versions. That being said, there was an opportunity to do a bit better on the legs, either beefing them up or adding some more accents. I wish that they would have done something different with the back, but I can't really think of what you would do. And while walkers like this are an impractical design, given that all you've done is elevate your gun and put your trooper in a position to get knocked off or break his arm, they would look kind of menacing to see come walking up.

I do also have to question an open-cockpit design when going against sniper and commando droids, but hey, that's me. For $20, this isn't a bad little set. It's the cheapest way to get 501st Troopers, Droidekas, and Clone Commando Captains (okay, you can only get that one here). Having multiples of this walker would be weird, but there is a bit of parts utility here. For the price, not a bad set, but not exactly groundbreaking either.

Walker looks nice and has a decent parts assortment

Good minifig assortment for the price

A little more could have been done with the Commando Droid to differentiate it, even if it was just a weapon or something

nice mini figs...but yoda looks a bit growly ...at least he has a "look" ..in the others he seems to be looking "off in space"