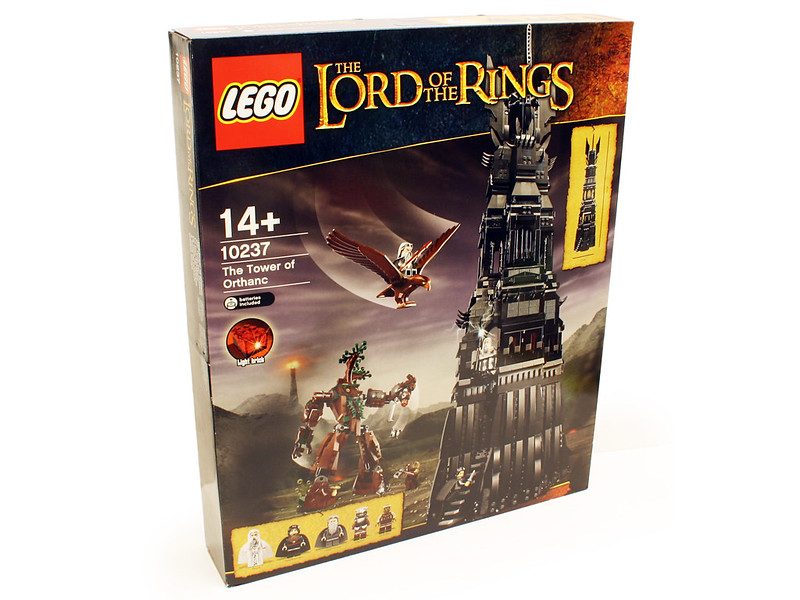 This is a big box.  It has the same frontal dimensions as last year's UCS-scale 10227 B-Wing Starfighter - a similarly priced set, though with fewer pieces - but it isn't as deep.  Orthanc is shown amidst the Ent-derived desolation of the valley of Isengard; an unnamed Ent shakes an Uruk while another Orc attempts to bring him down with a grappling hook; Gandalf simultaneously escapes on an eagle in a strange time-warp of the storyline.  A darkening sky sets the mood of the scene perfectly; quite why Barad-dûr is visible in the background is anyone's guess.  The height of Orthanc isn't readily apparent from the picture; a small inset therefore demonstrates the tower's dimensions.


Round the back, the tower's entire detailed interior is displayed for your perusal, accompanied by insets of various scenes: some canon, some less so.
[/b][/i] 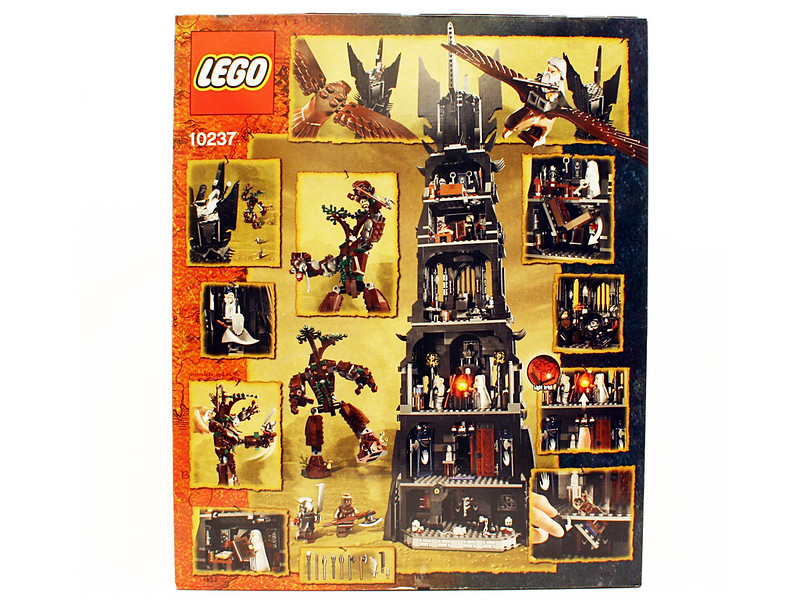 What's in the Box?

The box flaps are sealed with tape, so it can be flat-packed easily.

Out falls the separately-wrapped and cardboard-backed instructions and sticker pack, and eighteen polybags forming fifteen modules 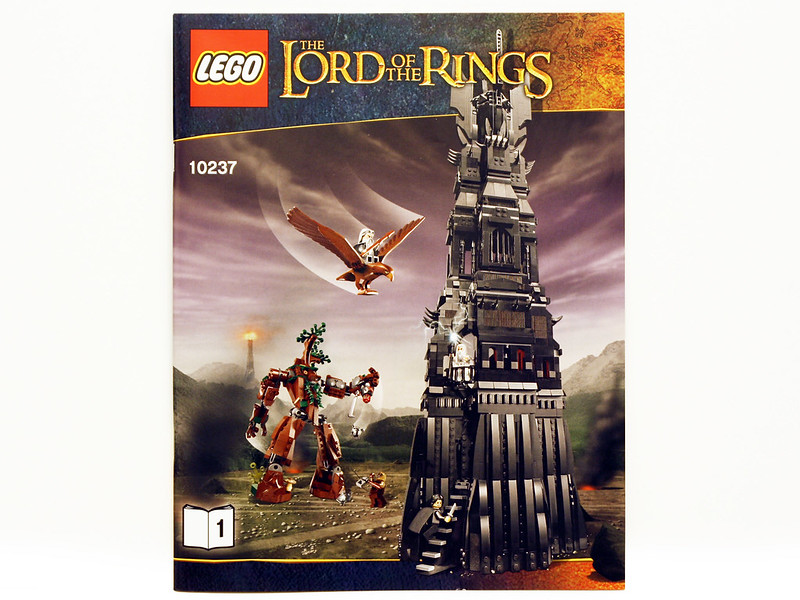 Three booklets are included, all of a similar size and thickness; all featuring the same image as the box front, and all covered with nice glossy paper.  On their backs are an advertisement for the LEGO Club, the detestable WinGangeGewinne kid, and a trailer for The Hobbit: The Desolation of Smaug; I'm not sure whether the last is a console game, a web game, a video, or a set; but whatever it is, it's coming in December 2013.  Maybe it just refers to the forthcoming cinematic release.


The modular construction is demonstrated over three pages at the start of manual one: 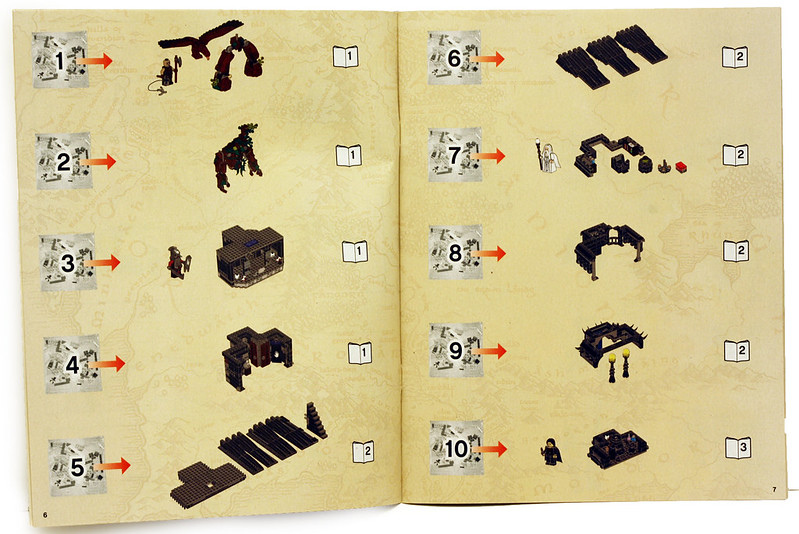 It's actually a little daunting.  Although the build process is modular, most sections start building directly onto the previous; there are only two places where the tower is designed to separate - between modules 9 and 10, and 12 and 13 - but even then, it doesn't separate easily.

Part call-outs accompany the instruction steps, which are generally easy to follow.  The Middle-Earth map is faintly visible in the parchment-coloured background.

Despite the preponderance of blacks and dark bluish-greys, there are no major colour-differentiation issues; I only made one mistake in the entire build - mistaking black for DBG on a 1x1 round plate - and I noticed the error very quickly.  The substantial inventory is located over three pages at the back of book three; Also at the rear of this booklet is a subversive 'Collect them all!' enticement, in the form of a minifigure display: 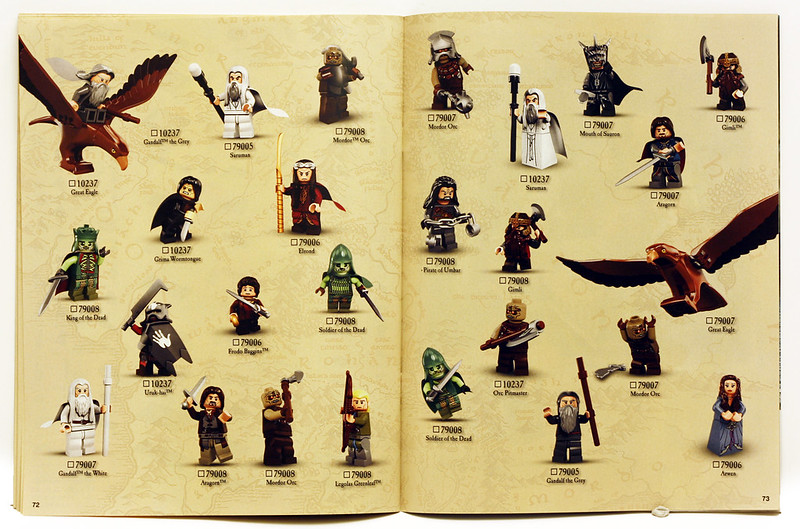 Quite why this is included in an adult-oriented set is anyone's guess, but I guess adults can be pretty obsessive collectors too (though less likely deface their instructions by ticking the boxes). 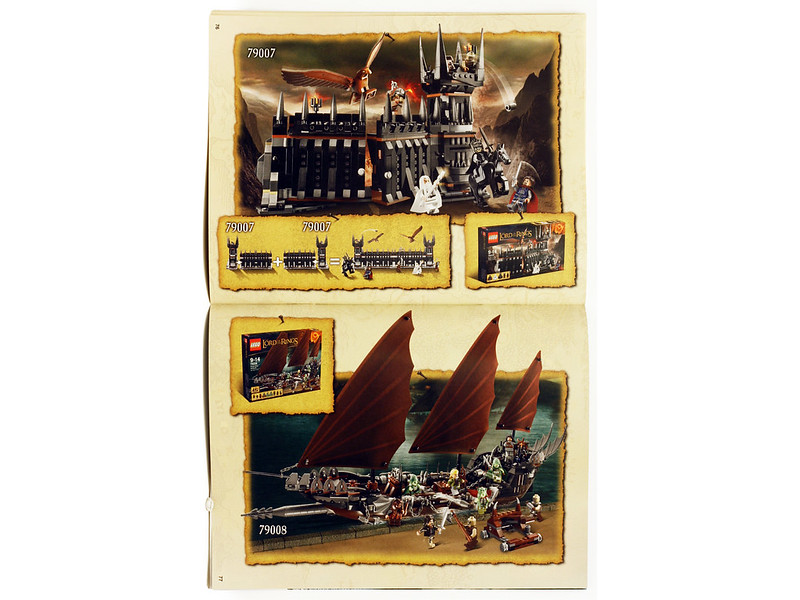 We are encouraged to buy two copies of the Black Gate in order to complete the scene; quite what we'll do with two Gandalfs the White is questionable, but it will help towards amassing an army of Eagles.  I'm particularly looking forward to the Corsair ship with its Dead crew. 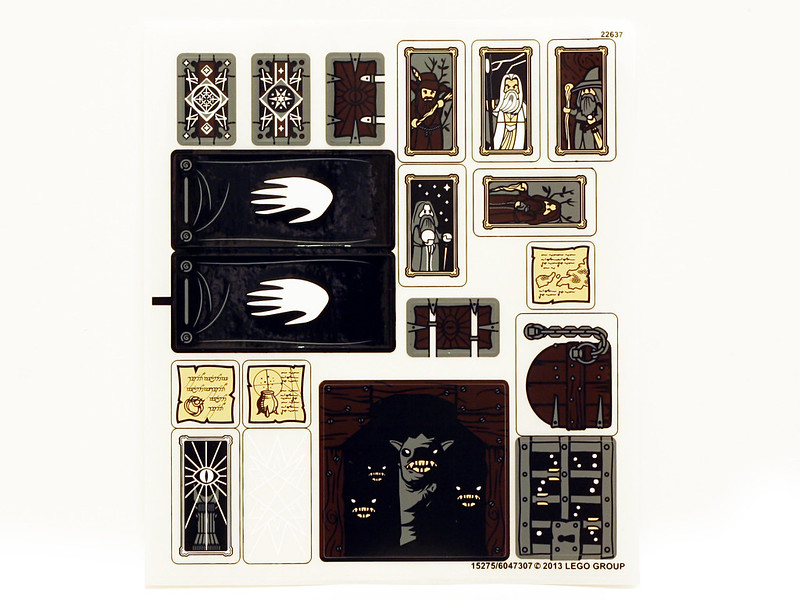 Thankfully, they are all applied to flat surfaces, but that doesn't stop them being a pain in the backside.   I've actually applied them this time, so we'll see where they go later.