When the 2011 second-wave sets were first leaked, the reactions for most sets was the same we’d felt in recent years: “meh, too expensive.” But then everyone glanced at the revision of the Episode I classic podracers, and what was in there, and the buzz was on. Early previews pointed to a sharp looking, well designed set from an area that didn’t get a lot of love in recent years.
Episode I is rightfully hated by pretty much anyone who’s ever had it inflicted on them, but the podracer scene was one of the highlights. Edit: Okay, I relent. I was apparently confusing Anakin in this with the video game, or the rest of the movie. I stand by the fact that it was too long.

But LEGO managed to take a bad scene and make an awesome set in its original run; 7171 Mos Espa Podrace was a great set with good build quality and a lot of parts that had never been seen before (and a few that haven’t been seen since). It wasn’t without its flaws, especially in the minifigure area, but it was a welcome site to see updated.So, the real question here is, can a set live up to the hype, revisisted 12 years later? Especially when it comes in with (a few) less parts and one less podracer?

Yes, yes it can. I won’t beat around the bush on that part; this set is just a joy to build. Yes, there are some places it could be better (*cough* price *cough*), but at the same time, it reverses a trend we’ve seen in redesigns making the sets worse.Final thoughts on the set? It’s great. The piece count is a lower than the old one (about 100 less), the price is the same ($90 USD), and there’s one less pod. But in the old set, piece count was inflated by the race pieces, brick-built pit droids, and ugly stands. The pod that’s gone isn’t really all that big of a deal (especially since with the new parts we’re getting, we can probably improve on it and build a nicer one in the new style), and the two remaining are quite a bit nicer.

As for the build quality, this set, and to be honest most of the sets in the mid-year wave, are just nicer builds than we’ve had in recent memory. This set was just fun to build, finding all the new part varieties, and just seeing all the changes. Some stickers were fine, some out of place, but it was still just fun. The last system set I had this much fun building was probably Republic Gunship redesign. It’s just that fun of a build.

However, I have to get a little bit of a soapbox here. This isn’t a ding on the set itself, and I’m not factoring it in to the review. But there were more than a few bricks that I saw that didn’t fit the normal quality I’d expect, especially in a $90 set. A few of the rounded orange bricks still had sprue marks on the ends. A minor complaint, maybe, but it’s still very apparent. My Anakin’s helmet didn’t fit quite right, I had to work on it to get it to fit quite right. The pearl gold bars also were showing marks where they were knocked out of the mold. I’m going to request replacements from LEGO, but still, it would have been nice to see better parts.

oh...so the over all impression I get it ..this "re-issue" is better that the original ieset .....but they still could have improved slightly in the "accurately represented" department .....and quality control considering you had said you had to correct a helmet problem so it would fix/sit correctly

were those also problems with the originally released set too???

somewhat; the original set was far worse of accuracy(see below) but had better quality control
the original one: 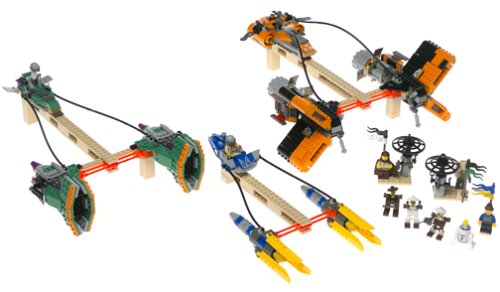