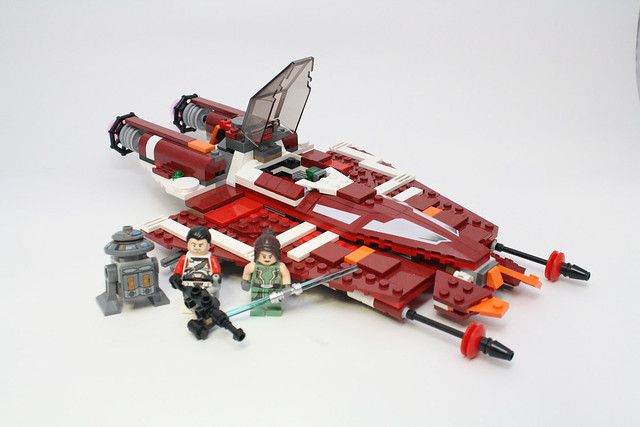 Rounding out the Star Wars: The Old Republic releases for 2012, we get the Republic Strike Fighter… which I don’t remember in the game. How do you write a review for a ship that you don’t recall ever really seeing in a game you played a lot? Unlike the Sith Fury, the Striker was just the little blips you shot down during space missions as Sith (I think… it went fast), not the ship that players end up with.

I’ve played some Republic characters, but only gotten into the mid-20s, and never did the space missions. After breaking my rule about never wandering to Wookiepedia, one of the websites where you can smell the obsession through the screen, it turns out this thing didn’t even show up in The Old Republic explicitly, it was from KoToR (and unnamed in the game). So yeah, I kind of question why it was included in the inaugural line of TOR sets.

Like the Sith Fury, it’s pretty obvious that this was a unique design that was inspired by other Star Wars ships, mostly an A-Wing (or for you EU people, some Z-95 too). It’s also very… dark red. At $45, this set is a niche (SW:TOR players) in a niche (EU Fans), so it’s certainly got some serious stuff stacked against it. So how does the Republic stack up against the pretty amazing Sith Fury? To be honest, not all that well. It’s hard to compare two sets that are so different in price, but they are from the same setting. The Old Republic had a beautiful design aesthetic going for it. While there are many flaws with the MMO, looks is not one of them. The Republic, for the record, had the Defender (inspired by the PT Frigate), BT-7 Thunderclap (inspired by Palpatine’s Shuttle, I think), and the XS Freighter (<sarcasm>gee, no idea what that is based on</sarcasm>).

It’s pretty clear that this set is a consideration of budget more than anything else… they were given two price points and had to cram sets in there, even though TOR really doesn’t establish anything in a small scale. It could have been a playset (and save a larger republic set for another wave), or they could have gone slightly higher and delivered something good. But hey, if I understood LEGO logic, I’d probably drink a lot more. 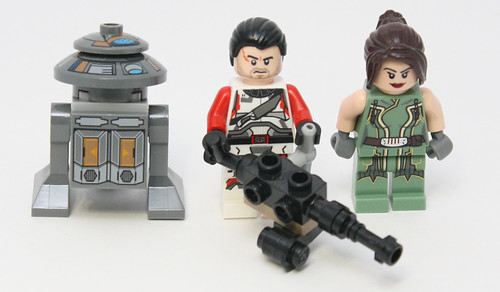 We get three figures with this set, all unique and from the game: Satele Shan (Jedi Master central to Republic Stories and seen in the intro video), Republic Trooper (who I just assumed was Colonel Jace Malcolm… the trooper in the intro video) and T7-O1 Astromech Droid (companion for the Jedi Knight character class).

Malcolm is the most boring of the bunch, shown more as a generic trooper that has no helmet (living dangerously in a galaxy divided by war). He’s a commando in the game, and that shows through in the printing. He’s got a huge brick-built gun, which is a big part of the commando character game. Of course, that gun means that he’s a healer or DPS in the game, not a tank…

The lack of a helmet is what really hurts this figure. The printing is nice, and if you want to swap in a clone helmet and really have some sort of jonesing for a different variety of clone trooper (because there are only, what, like eighteen million different types at this point?) you can easily do it. 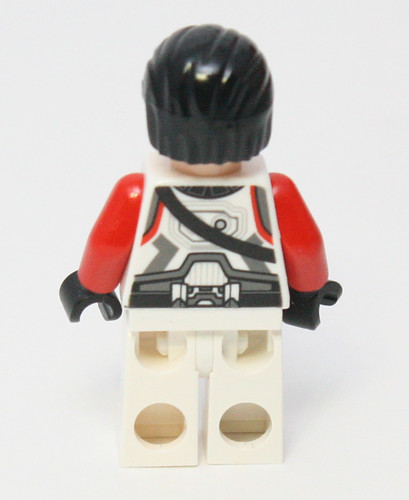 Master Satele Shan is the pilot of the strike fighter, at least on the box, which is kind of curious, given that in the game, she’s established as the Grand Master of the Jedi Order, and every Sith in the galaxy wants her dead. She’s one of the most powerful characters in the universe and flying around in a wildly vulnerable ship. Seems just an odd choice. 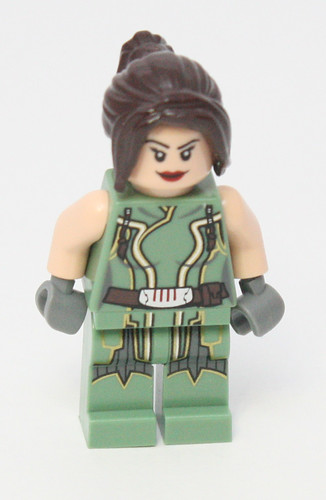 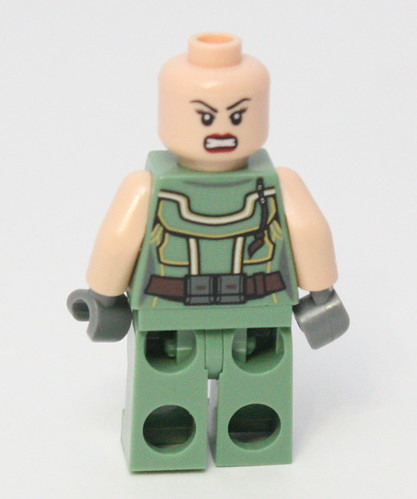 Don’t get me wrong, I love having a minifig of her, but it’s just strange. As to the figure itself… taken out of context, it looks great. We have a female character that isn’t decked out in pink or flairs, not wearing stripper clothing, and looks in place with other Jedi figures. I absolutely love the torso and legs, and the exclusion of any flesh printing adds to the utility in non-fleshy settings (assuming you swap the arms).I’m not a fan of the braids being printed on torsos, but you can always pretend they’re some sort of trophy I guess.

However, when you take the figure in context, there’s a huge problem with it… in the game, she’s always wearing tan and brown. It’d be one thing if she’d been in previous settings, but she was created for The Old Republic. This isn’t an evolution of a KoToR character (like several others in TOR, especially on the Sith side), it’s someone new. And she’s been detailed for years leading up to the release. I don’t understand why LEGO went in a different direction, but it’s a pretty big oversight.

Unlike the ever-present Bruce Wayne and Leia head… we actually got a new female face for Satele. That is great, and it also comes with an alt-face that’s apparently very un-Jedi. In The Old Republic, they establish that Satele is uber Jedi, with crazy Yoda-like calm. She does not get emotional, even when confronted by unbeatable odds (like when Malgus from the Sith Infiltrator wiped the jungle with her in the intro video). The angry face is a curious choice here, and one that doesn’t fit the character.

Last up is the reason why a lot of people bought this set, Teeseven (how is name appears in the subtitles and dialog). While I’m not obsessive with astromechs… I do love me some astromechs and the funny situations they can get in to…

… so when I saw T7 the first time, I had to get him. That was a given. He represents a huge departure for astromechs in LEGO Star Wars, being brick built. While brick-built droids aren’t anything new, they’ve had iffy results in the LEGO line. 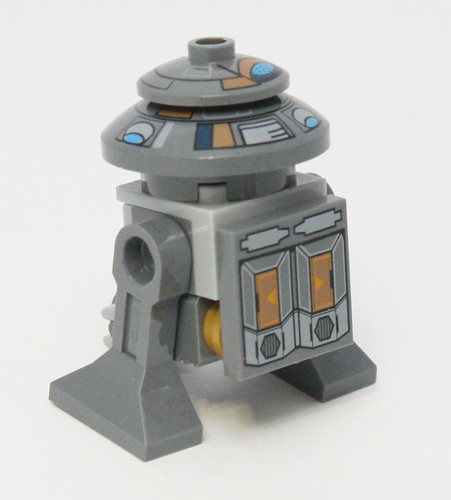 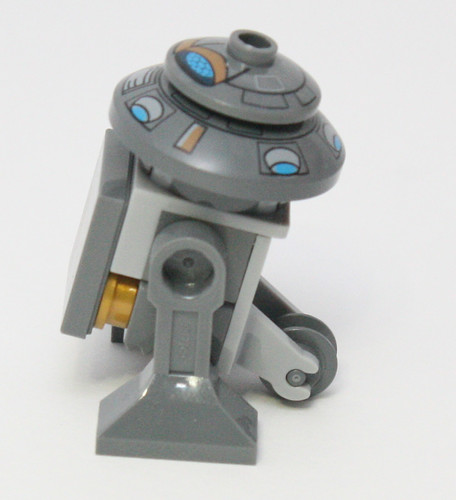 T7, on the other hand, gets just about everything right. Printed tiles make him far more durable, and a few different parts put together really help. Yes, in TOR, all of the astromechs look like rolling trash compactors. It wasn’t until ten thousands years of peace came about that they mastered rolling cylindrical trash cans. He’s actually a pretty slick little build, using mostly stock parts to create a boxy look, but adding the small wheel and hub to the back just puts this thing over the top. Plus, those little dishes that are used to make the top have all kinds of potential uses. 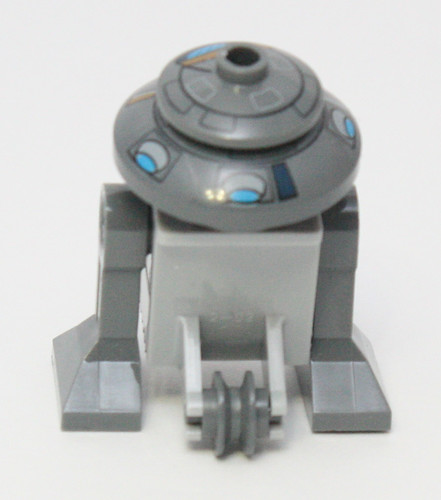 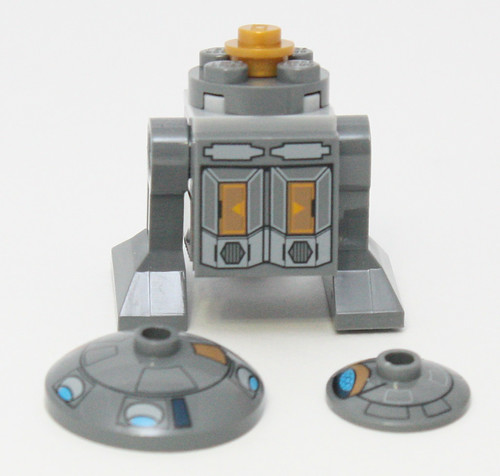 He’s obviously bigger than a regular astromech, so if you want to use him in the ship slot like the X-Wing or Y-Wing, it’ll probably need some modification for the slot. I haven’t tested it, so can’t confirm that, just sort of eyeballing it. 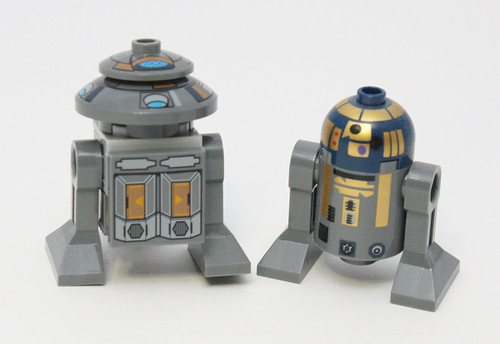 As for the ship itself, which I suppose is the core part of the set. Shocking, I know, but they apparently are packaging ships with their figures now. The Striker fighter is a swing-wing design that looks like a A-Wing when closed and a Z-95 when open (a standard EU ship that was also in Star Wars Galaxies). At first glance, it’s a nice little fighter design… 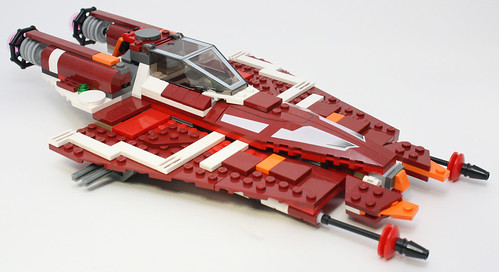 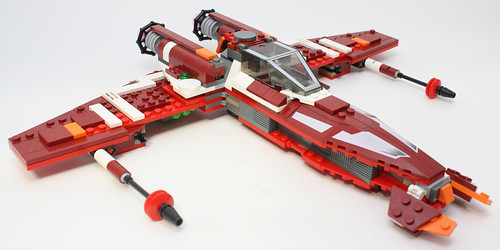 But first glances can be deceiving. It’s hard to really pin down what about this build doesn’t really fit. to someone relatively new to the hobby, it comes across as simplistic, I think, but to some of us old farts that have been spending far too much for far too long… this ship build is a real throwback. With the exception of the swing wings, which click into place on clips/brackets, this felt like building a ship circa 2002 or so.

You’d think that a nice retro visit would be cool, but some how, it just feels dated. I built this after the Sith Fury and Saesee Tiin’s JSF, both exceptional builds and sets. This one gives you that little twinge of sentimentality, like watching a movie or TV show you remember loving as a kid… only for you to realize that apparently you were out of your mind. Don’t know what that’s like? Go watch the old G1 Transformers cartoon or Thundercats… *shudder*. 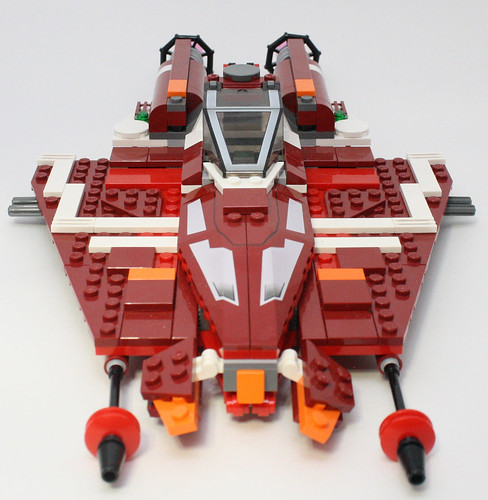 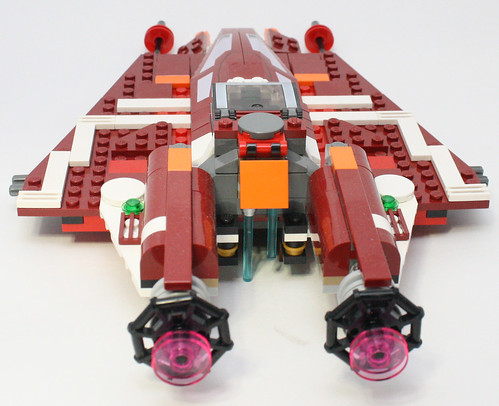 Let me be clear… by itself, this ship doesn’t look bad. It’s a nice little design. It’s just flat and basic. There are no unique building elements here. Simple hinges, everything in a straight line, and it feels more like a beginner moc than a finished set. Especially once you get to stuff like the tiling and color selection. I suppose what that means is that the ship is just boring.

The wings do swing open and lock into place on either end, and with it, the guns rotate in and out on a technic hinge and bar. Again, basic, but it sort of works. Of course, the flick-fire missiles are now pointing into the interior of the ship, so be a little careful hitting that fire button. The actual missile mechanism is okay, I suppose. I hate to see wasted parts, but not sure what could have been improved with these that wouldn’t require a total reinvention of the ship.

In the end, the biggest problem with the Republic Striker is that it isn’t as good as the other offerings around it. Around the same price point, we have the X-Wing, TIE Fighter, Anakin’s Jedi Interceptor and the Y-Wing. Any one of these would be a better ship to build than this. The minifigures are cool, but I don’t know if they’re cool enough to justify the ship.

It’s hard to pin down. I really wanted to like this set, but the misses outweigh the hits. The minifigures can’t save it, and unlike it’s enemy, the Sith Infiltrator, it doesn’t look good on the shelf. Sure, some of the parts have a lot of utility in other builds, like the printed slopes used for the nose and the astromech tiles and dishes, but at this price point, they’re not worth getting.

Unique figures can fit into multiple settings
Brick-built astromech is just fun to build. We need more of these, and more of the printed tiles that they use
Actual printed tiles vs. stickers is always nice to see
What I didn’t like

Ship isn’t even in the game these sets are based on
Angry face on the Grand Master Jedi, who is a picture of serenity in the games, makes no sense
Throwback build isn’t that fun, especially compared to other ships that came out in the current wave
Build is simplistic and boring
Verdict: Skip it, unless you get it on sale for the nice figures or want a ship to MOC up

this would be a good beginner build ....
I don't know if I did have money if I would buy this one thought ...it doesn't seem as polished as the others ....although I very sure an inexperienced builder would enjoy doing it

but for the moment unigue ..right .....until the others hit the stores??

for another 2 months; yes however by the time you might get a set; no