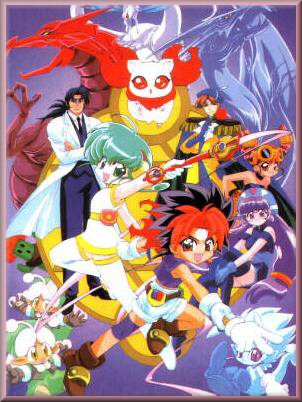 Parallel to our own world are six Mon Worlds where myriad monsters dwell. Mondo, along with his girlfriend Rokuna and her father, Professor Hiragi (a genius scientist), have found a means of traveling to those worlds...but it turns out they're not the only one who've learned the secret.

To protect Earth and the Mon worlds, Mondo and Rockna have paired together to form the Mon Colle Knights, protectors of the Mon worlds. Their mission is to locate friendly monsters and pit them against the forces of Prince Eccentro, who intends to conquer the Mon worlds and then use the monsters to rule the Earth.

this series runs 51 episodes,unfortunately the dub version ran only 46 episodes and two were never air #'s 38 and 46
And so I present to you the 44 episodes  that were aired ...most of the openings are not on the files,at the time I did not tape it after the first episode on a tape ..to save space
Genere: Comedy, Fantasy, Romance Rated : PG