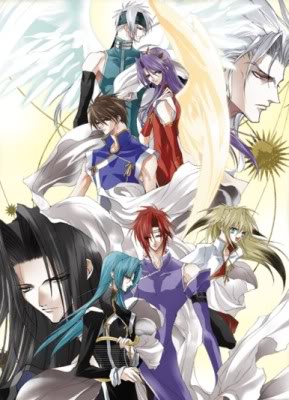 The guardian angels that descended to the Human World went missing one after another. Behind this incident, the presence of an evil animal spirit is felt---

The 4 Gods of Beasts, Saint Beasts (Blue Dragon/Seiryuu-Gou, Green Snake/Genbu-Shin, Red Pheonix/Shujaku-Rei, White Tiger/Byakko-Gai) descended upon knowledge of this incident. In an attempt to rescue the guardian angels, as well as to find out what this evil animal spirit is......

What in the world could be the reason behind these disappearances? How would the Saint Beasts fight the evil animal spirit? And, what kind of scheme underlying all these incidents?

A must see for female fans, for the appearance of beautiful Characters appear one after another. Gorgeous battles, an easily understandable outlook of the world, charismatic characters fill each episodes, making it a must-watch series.


This series runs a total of 6 episodes