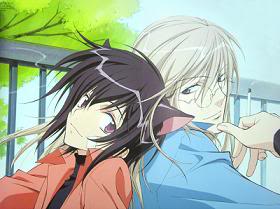 Twelve-year old Aoyagi Ritsuka lost his only kin when his brother, Aoyagi Seimei, was killed under mysterious circumstances. One day, he meets Agatsuma Soubi, who claims to know his brother. It turns out that Soubi and Seimei used to be a fighting pair, whereby Soubi was the "Fighter" and Seimei was the "Sacrifice". Now that Seimei is gone, Soubi 'belongs' to Ritsuka who will become his new "Sacrifice". After learning that Seimei was killed by an organisation known as the "Nanatsu no Tsuki", Ritsuka decides to join forces with Soubi and investigate the truth behind his brother's death.

This series run a total of 12 episodes with 6 Extras

To view these extras correctly please watch 2 episodes then an Extra....continue this pattern untill you have viewed the entire series