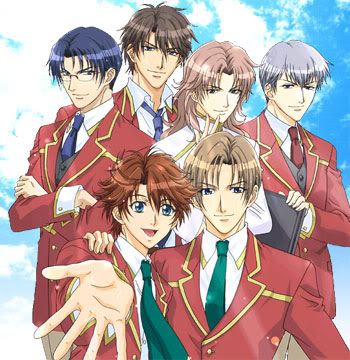 Ito Keita, an average guy, is shocked when he's invited to attend the elite institution, "Bell Liberty Academy". Unnerved by the mystery, he's further distracted by the school's social dynamics.In a sea of amazing young men, Keita struggles to find out what makes him unique, and how he can possibly deserve to be treated as an equal by the boys of BL . Lacking any particular ability, just why has Ito been welcomed into the privileged world of the talented and the beautiful?
Along the way, he develops intense relationships with the almost everyone at school, but he is, terribly, drawn to the friendly, overcaring but very mysterious classmate, Kazuki Endou.

Keita is picked up by Niwa, the president of the student council, and from then on, he is warmly welcomed by everyone to BL Academy.
Keita's first actual friend is Endo Kazuki, who immediately takes Keita under his wing and takes care of him to the extent that Keita laughingly dubs him "grandmother." The two of them become a steadfast pair, but in the days that Kazuki is not around, Keita has no trouble finding other company among the other students.
Occasionally Keita has flashbacks to his childhood, where he is playing with a slightly older boy whom he calls "Kazu-nii." He can't remember much except that he and "Kazu-nii" were close at one point, but these memories seem irrelevant to his current life, so Keita dismisses them.
Meanwhile, Kazuki is involved in a power struggle with the Vice Chairman of the board. The Vice Chairman is distinctly annoyed that the former chairman chose to leave his position to Kazuki, and views Kazuki as a young and incompetent despot incapable of running BL Academy, much less Suzubishi Corporation, the business group that owns BL Academy and many scientific research and development companies. Indeed, Kazuki rejects many of the Vice Chairman's proposals and seemingly "abuses" his power by admitting a student of no particular skill-- in this case, Ito Keita-- to BL Academy. Keita unwittingly becomes involved in a potentially deadly power struggle between the Chairman and Vice Chairman. Kazuki stakes his position on the outcome of the school's annual "MVP Battle--" that is, if he and Keita do not manage to win the competition, he will resign his position as Chairman.

any problems please post in the "not playing" thread