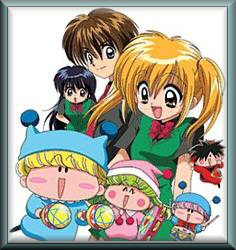 Kaede is a fine and bright girl in first year going into second year of middle school. One day she wondered into a fancy shop because she was attracted to a cute mug. The shopkeeper told her that the mug will grant her wish, so she wished to be in the same class as Yuuki who she has a crush on.

Apparently her wish is granted, and she is in the same class as Yuuki on the next day, her first day in second year. So, she went back to the mysterious shop and bought the cute mug. And when she says her wish, Mirumo, a little blonde fairy, appeared before her.