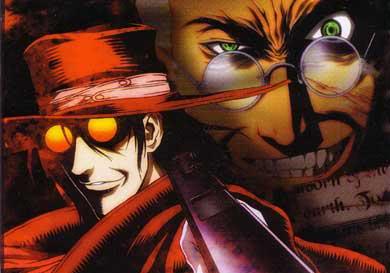 Vampires exist. It is the duty of Hellsing, an organization backed by the British government, to hide this frightening fact and protect the blissfully unaware populace. Along with its own personal army, Hellsing also has a few secret weapons. Alucard, an incredibly powerful vampire, has been controlled by Hellsing for years. Although he dislikes being a servant to the Hellsing family, he certainly enjoys his job as Hellsing's vampire exterminator. Seras Victoria is a fledgling vampire and a former police woman. Although reluctant to embrace her new self, she is still a valuable member of the organization. Integra Hellsing, the current leader, is usually fully capable of fulfilling her duty, but lately, vampire activity has been on the rise. Unfortunately, the cause is more alarming than anything she could have imagined...
This series runs a total of 13 episodes and is rated 14+
Episode 01..Episode 02..Episode 03
Episode 04..Episode 05..Episode 06
Episode 07..Episode 08..Episode 09
Episode 10..Episode 11..Episode 12
Episode 13
...Any problems please post in the "not playing" thread or PM me..