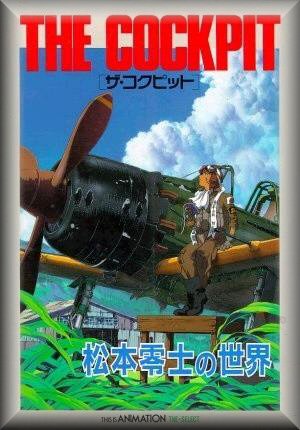 The Cockpit is a series of 3 OVAs focusing on three separate stories of the tragedy of war.

The first, Slipstream, follows a Luftwaffe pilot who must choose between his duty to his country: to guard a bomber loaded with Germany's final hope of victory, the world's first atomic bomb, or his duty to the world: to let it fall in flames to enemy Spitfires and be a footnote in history. Of course, things are complicated by the plane's other cargo, the woman he loves.


The second story, Sonic Boom Squadron follows the pilot of an Ohka bomb, the purest kamikaze desperation weapon of the Pacific war. He once dreamt of flying a rocket into space, but instead he is to fly a rocket into an American ship for the glory of Japan. If only they would have let him live another 30 years.


The third story, Knight of the Iron Dragon, is set on the Philippine island of Leyte, where a rusted old motorcycle tells the story of two Japanese soldiers who returned to a captured airfield to fulfill a promise, a promise that neither could ever keep.


Note: Each episode is directed and has a screenplay by a different director: Yoshiaki Kawajiri, Takashi Imanishi and Ryosuke Takahashi respectively.

Any problems please post in the "not playing" thread or PM me ..