21103 Back To The Future Time Machine

21103 Back To The Future Time Machine

've already received flak for expressing my negative reaction to the set. So you should be forewarned that if you were one of those people that were offended by my previous opinion, you should stop reading right now.

Boy, how excited I was when Masashi's DeLorean model not only garnered the 10,000 votes needed to achieve review status on CUUSOO, but that it was actually approved by everyone that needed to sign off on it? That was a happy day indeed since NO ONE thought it would make it as a set. Months went by between the time that the CUUSOO team announced their decision and recently when leaked images of the set began to surface. 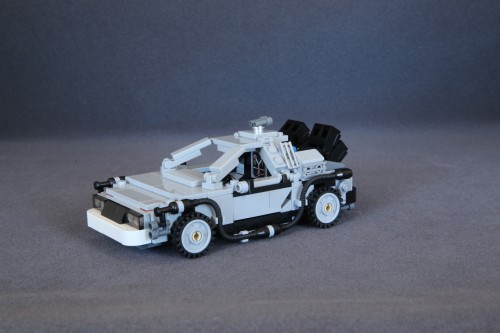 Let's get the obvious out of the way: the front half of the car looks nothing like the DeLorean DMC-12 that the model is supposed to be based on. There is no slope on the hood. The original model featured this slope element which is a perfect fit for the low angle of the car. The final model got rid of the slope and replaced it with layered tiles. This wasn't without reason. If you look closely at the Part III version of the car on the CUUSOO project page, the 1955 time circuit on the hood isn't really attached to any studs since that slope doesn't have any on its face. So as a workaround, the designers replaced the slope with layers of tiles and plates so that you can easily convert the Time Machine into the Part III version and back to Part I or II by simply removing a 1x4 tile. Changing the hood in this way was probably the most significant detraction on the model's appearance. All the other issues, as uglifying as they are, seem like minor offenses compared to this. 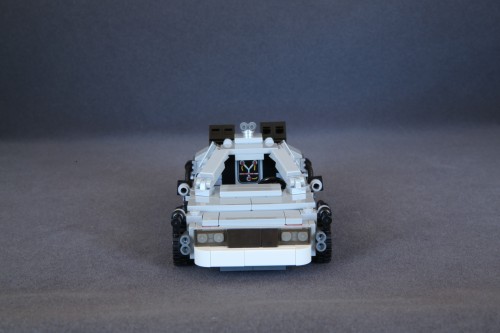 Another issue: The front bumper. I actually watched the Back to the Future movies while building the set and writing this review and not once did the DeLorean ever have a white bumper. It does have a plastic bumper that's slighly opaque, but I don't think it's enough to make the bumper white. If anything it should be light gray to match the rest of the car as that is how it appears on screen. And don't even get me started on the doors. There's not much to describe about the doors because there's not much door to describe. The door has a single one-stud connection point to the lifting arm. I do give kudos to the designers for achieving the gull-wing doors. 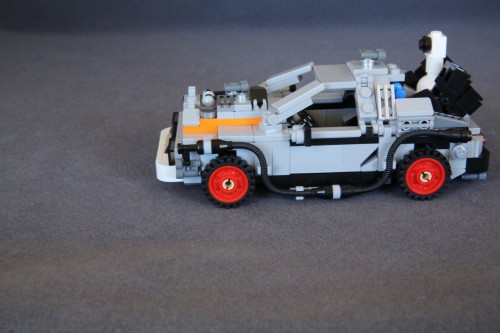 The next issue: The wheels are exposed. There is a distinct lack of fenders and wheel wells making it look like the wheels are just sticking out of the side of the car, which they are. The tubing used to simulate the wiring that runs along the sides of the car distracts your eyes just enough to not notice the poor execution of the wheels. They do however rotate down to achieve the hover effect when the DeLorean is in flight mode. 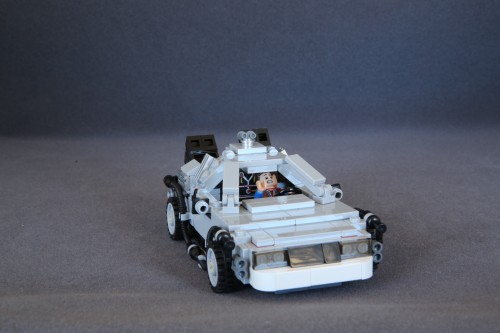 Moving to the inside of the vehicle, you can't seat both minifigs inside the car at the same time. You can fit Marty, or Doc, but not both without getting creative. Seating is already an exercise in patience with Marty but Doc Brown by himself is nearly impossible to fit without pulling the roof off simply because of his hair and the lack of head space, which is due to the lifting arm of the door being at such an angle. You almost think there's room to fit both side by side, but there isn't because of said lack of head space. 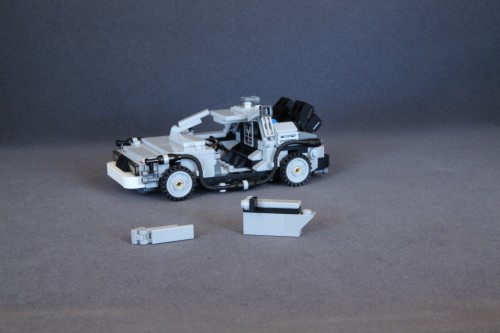 The model as a whole feels fragile. The doors kept popping off, the A-frame kept popping off, the greebles all around kept popping off. I admit this may not be a valid complaint as this model is definitely a show piece more than a play piece. In the case that someone does want to play with it though, to say, swoosh around the living room or office, that someone should be careful as any sort of grip has a high potential of popping some pieces off. Even as I was gently handling it for photography, I found myself reattaching something every time I touched it. 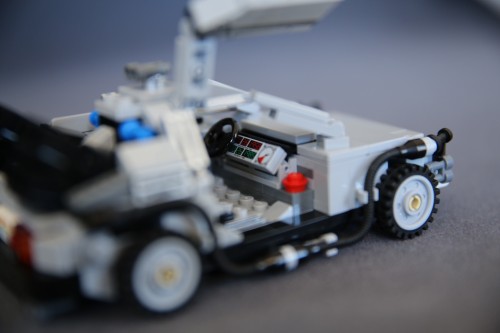 My final complaint goes to the time circuit display panel. There's only space enough for two dates, but that's not really the issue. My complaint lies with the date they used. One is October 26th, 1985 which is fine. It's the day that the DeLorean first time travels, or the "present" time. The other date, the "destination" time, is set to January 28th, 1958, the date that the first LEGO brick was patented. And see, I have a huge problem with this. Out of all the dates they could have used that actually appeared on the display panel, like November 5th, 1955, or October 21, 2015, or even September 2, 1885, they chose a day that is only relevant to LEGO. It's extremely narcissistic and self serving. It has no relevance to the Back To The Future trilogy and to put it simply, it just doesn't belong. They took a set about a movie and found a way to make it about themselves, as if trying to retcon themselves into the trilogy's legacy. So annoying.

This review isn't all negative though, as there were some fun parts to it. 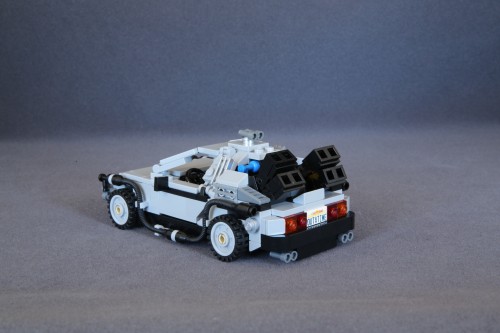 The rear assembly was quite satisfying to build, especially the exhaust ports. I failed to notice that I didn't press the driver's side port all the way down while I was taking pictures, so forgive me on that detail. And attaching the famous "OUTATIME" license plate to the bumper assembly made me a bit giddy. 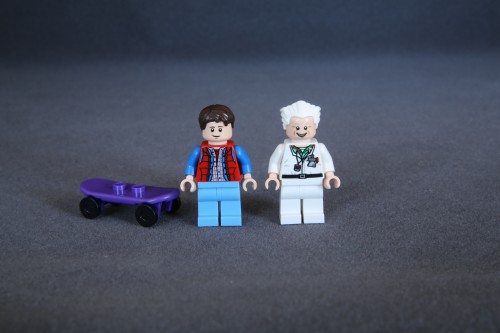 The minifigs were a nice surprise. Initial leaks didn't show or mention any minifigs and not only do we get one, we get two: Marty McFly and Doc Brown as they appear at the beginning of Part I. They each have an alternate face and back printing. There is no detail on Marty's skateboard, and I'm a little bummed they didn't include Einstein. 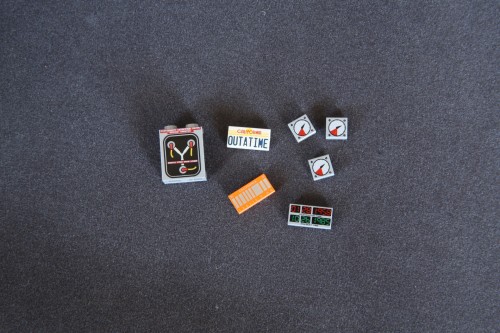 All of the printed elements are awesome. Stickers would have been okay and are par for the course when it comes to LEGO, but printed elements are a rare commodity these days, so seeing all of the key elements as a printed piece really brings up the overall quality of the set. Don't get me wrong though, it's still a terrible model.
It should be noted that the packaging of the set is unlike any other LEGO set other than the Yoda Chronicles teaser promo set that was sent out ahead of the New York Times Square X-wing event. The instruction booklet was also pretty nice. Not your usual stapled fare, but it looks and feels like a thick booklet. I don't own any other CUUSOO sets so I'm unsure if this is how their instruction booklets are usually.

Overall, a disappointing set and not really worth picking up unless you're a speculator, have a thing for licensed themes, or are building your own DeLorean and want the printed elements and minifigs to complete your model. No one thought this set would become a reality, and just the experience of building the time traveling DeLorean from one of the best 80's science fiction movie franchises was pretty satisfying and nostalgic. It's just too bad the final model sucks.

But you know it will still sell like gangbusters.

well ..I need to be honest DT,,at first just looking at the first picture ..I though of Jurassic park and catching a few dinos...realized the colour was not right for that ...

then I started reading...over all it looks okay as sets go
I do like the mini figs....
...but the car ...well *looks up*
I agree the printed elements ARE very nice to see and yup ..no many of those around...
I do like the back end of the car though...it does look cool..

they really did the second date as their first product release date...that is so 'not right' ...so full of themselves
...is as is on that I guess...they can't undo what's done

very true,,,a nice sticker to cover-up such a blunt in your face attention grabber for themselves would be very handy to have... I would change it out in a second...