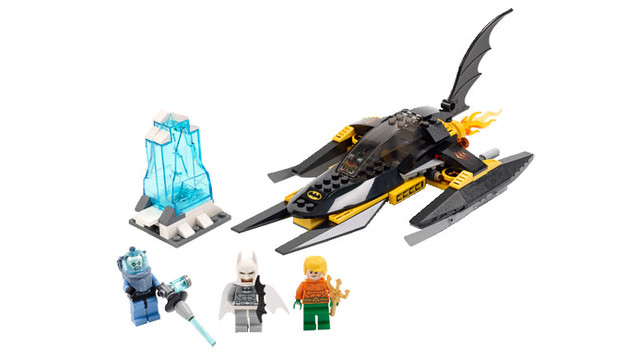 No, it's not an ice-skating show. I'm talking about the latest set in the Batman and Friends Super Heroes theme, "Arctic Batman vs. Mr. Freeze: Aquaman on Ice." Is that the longest Lego set name ever? I guess they were trying to squeeze the names of all three characters into the title. Anyway, I was lucky enough to buy this set (along with some other 2013 sets) when the local lego store had them up for sale for a short time, so I am able to bring you an early review of this set!

The box is the same size as that of all sets of this price range this year and it's very blue, which fits the winter theme well. It has a nice illustration of Batman in his nifty new arctic suit in the top right corner. The boxart shows our two heroes battling Mr. Freeze on what is presumably a frozen Gotham City Bay. My copy of this set appears to have a typo in the set title as it says "Artic Batman". Hopefully they'll catch on to this before these are widely released as it is quite embarrassing to have a typo right on the front of the box.
The back of the box is mostly orange for some reason. It doesn't go very well with the winter theme, but it doesn't look bad. It shows an alternate action shot and all the play features.

Inside the box you'll find an instruction booklet, a relatively large sticker sheet, a comic book, and four bags. Surprisingly, none of them are numbered. The comic is about Batman's enemies escaping from Arkham and Batman, Robin, and Aquaman trying to stop them. There's also a short comic featuring the Tumbler and Bat, but it hardly has any story. The TDKR Bane on the cover looks a little out of place to me. 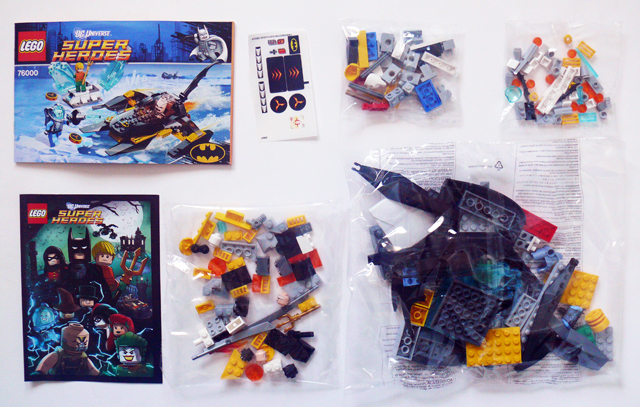 The instructions also have an orange background which doesn't suit this set at all and is a bit distracting, but other than that the instructions are pretty easy to follow. As usual, there's a slight image of three figs from this wave in the top right corner of some of the pages: Aquaman, TDKR Batman, and Arkham Asylum Joker. Quite a random group of characters. I think it would have made more sense if it were the three figs from this set, but oh well.

The minifigures are the main selling point of this set as they are all new and exclusive. Batman comes in a new, mostly white suit that is supposed to keep him from freezing. I guess that makes him the Light Knight? He looks pretty cool, in every sense of the word, although this specific suit wont be very versatile.
Mr. Freeze gets a complete redesign from his previous incarnation. The biggest difference is that he now sports a sand-blue Atlantis diver helmet. It looks pretty good and I really wanted to like this fig since Freeze is one of my favorite Bat-villains, but the face just ruins it for me. He looks more like an angry zombie than Mr. Freeze. He is supposed to be emotionless, so why is he so angry? And where are his goggles? Only the worst interpretations of this character didn't have goggles, so I really don't like that he doesn't have them.
There are people who are fans of Aquaman, and then there are people who view him as a joke. Unfortunately, I am one of the latter. I can't believe that out of all the DC superheroes they could have put into this set, they chose Aquaman. I mean, he's just a guy who talks to fish! I would have much rather gotten Green Lantern, or the Flash, or Martian Manhunter, or anyone really. But I guess in the context of the set, it kinda makes sense for him to be included, and I find it pretty funny that TLG seems to think that he is a joke too since he merely plays the role of a damsel in distress in this set. It's even implied in the set name! I would probably feel warmer towards this minifig if it at least looked cool, but it doesn't. It looks like Aquaman, yes, but there's something about the face or the hair that makes him look too boyish. He looks more like Justin Bieber in pajamas than the king of Atlantis. I do like the printing on his torso though. 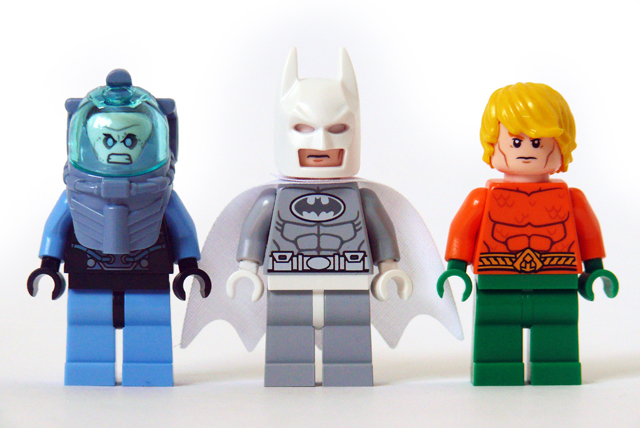 Here are some reference images. Mr. Freeze seems to be based on his Arkham City design whereas Batman's Arctic suit originates from the The Batman cartoon. Aquaman is based on his usual comic appearance. They are all very accurate. Looking at them from the back, you can see that Aquaman also has some nice printing on his back. Batman with his white cape and cowl blends into my white background like a ninja! 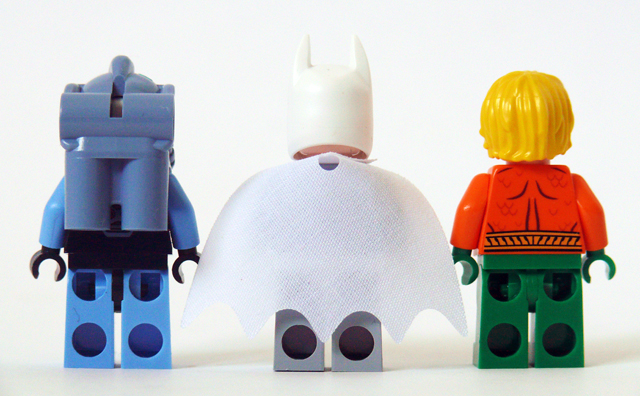 I have taken off his cape and cowl and Mr. Freeze's helmet so that you can see their back printing too. It's pretty detailed, and considering that they don't really need it, it's nice that TLG added it anyway. 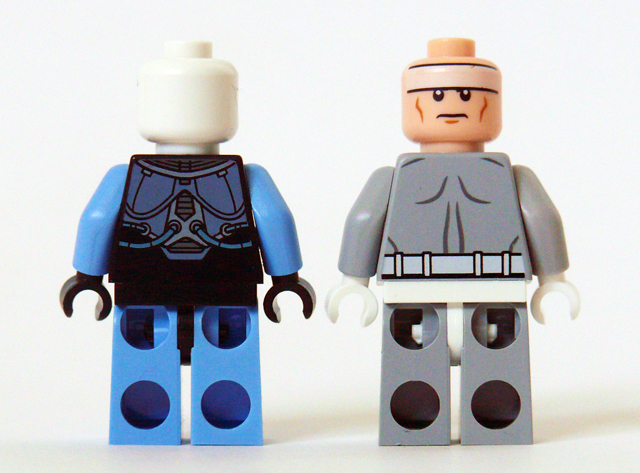 Here's a lineup of all of Batman's different suits so far(well minus the dark knight rises one). The Arctic suit fits in well with the rest.

The first thing you build is Mr. Freeze's freeze gun. It looks nice and retro. I like the energy cell attached to it, but I'm not too fond of the overall lance shape. Batman gets two of his usual black batarangs. This seems like a missed opportunity to make Batarangs in new colors like white or blue, but oh well. Aquaman fittingly comes with an Atlantis trident.

Next, you build Aquaman's ice prison. The base is comprised of slopes and tiles.
Then you put Aquaman in the middle and trap him inside the two rock pieces. See ya, fish whisperer.

He fits inside easily, but it can be difficult to close the trap when he is carrying his trident. Overall, the ice block looks pretty good, but I think I prefer the marbled rock pieces from the old Batcave set. 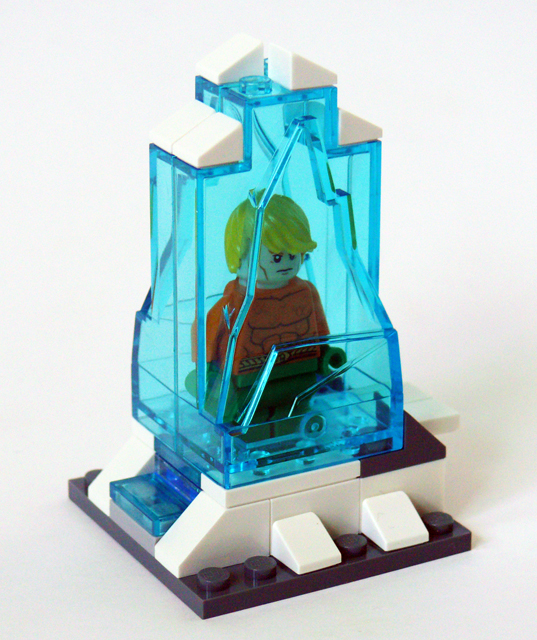 In order to save him from becoming a fish-stick, you simply push down the white tab on the side. Since the rock pieces are only attached by one stud, it works fairly well.

and lastly is the batboat.... if you cant see it in the top pic or haven't played lego batman 2 then yea; its kinda a letdown... that said it is very accurate to how it was in the game(only mainly minor changes(slightly less rounded cockpit shaping, flick fire discs) keep it different enough to notice)

The Batboat has several features. The cockpit opens up and there is a steering wheel and two control panels inside. It's kind of a tight fit, though, and it's impossible to seat batman inside without wrinkling his cape. Each side of the boat has a pin for shooting discs which I guess are supposed to be some kind of heat-batarangs. It works well and the discs shoot pretty far. On the back, it has two bombs which can be deployed by simply pushing them off the stud they're attached to. It's pretty low-tech, but it works. You can also spin the engine flame.

Here's the full set. I think it all fits together nicely. You get a cool vehicle, a nice piece of exploding scenery, and three exclusive figures. It's a worthy opponent to its Marvel counterpart, Spider-Man's Spider-Cycle Chase. Design: 5/5 - I love the Batboat. It's so sleek and swooshable. It looks like a bat and has several play features, including Batarang holders. I think it's my favorite Batvehicle so far. The block of ice looks good too.
Build: 4/5 - The build is varied, not repetitive, and overall quite satisfying. It's a bit of a pain to put on all those stickers though.
Minifigs: 4/5 - The minifigs are pretty good for the most part. Arctic Batman looks great and Aquaman looks decent too, although the choice of hair piece could have been better. Mr. Freeze looks pretty good in his Arkham City style suit, but they really screwed up on his head in my opinion.
Playability: 5/5 - Like I said before, the Batboat is very swooshable and has 2 disc shooters and 2 bombs. What more could you want? The exploding feature of the ice block is nice too.
Parts: 4/5 - You get a good variety of useful parts, some of them in rare colors.
Price: 4/5 - 198 pieces is a decent amount for a $20 set, especially a licensed one.
Overall: 4.5/5 - This set is a good value. It gives you one of Batman's signature vehicles from the videogame, an exploding piece of scenery, Batman in one of his special suits, a new Mr. Freeze (who will go nicely with the upcoming Arkham Asylum), and another hero to add to your Lego Justice League, as useless as he may be. It's a good buy for Batman fans of all ages and a very fitting set to build during the winter season. The only thing that keeps it from being great are Mr. Freeze's and Aquaman's terrible heads, but that's just my opinion.

it is long for male minifig hair(normal male minifig hair rarely is that long towards the back(aragorn is one of the only other characters(quigon had longer but that was the rare type of minifig type where it was needed) that i can think of having that long of hair of a male minifig); it is very wavy for him; though the pics might not do it justice it is really wavier than you might think; bruce Wayne's hair(in blonde/yellow) would have been a closer fit of style and length than what they used
this is the part im referring to for them to have used:

its very close to how it is in the comics both old and new
*wonders if any of the design guys every even looked at the comics????*

im betting that most of the people whom lego uses towards designs has at least basic reference knowledge from the comics/movies/etc... at hand(pics/etc...) to work with and is only really limited by the possible new parts cost(time/$$) and or the timeframe;

very true it is very much easier to just "recolour" a piece rather than make and design a new mold .....

yet that still brings up the question of why that piece; i can think up 4 preexisting moulds for the hair that were closer in style than what they settled on

yup... if they looked in the "kiddy" sets they would have a hair piece that both fits color and style wise ....it was in one of the western sets...can't remember exactly which one ....but its in there