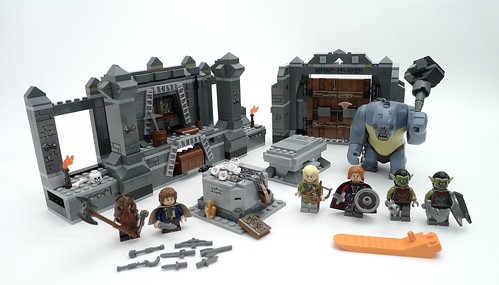 in the film, The Fellowship of the Ring, the Moria is portrayed as big place. When the LEGO The Lord of the Rings set names were revealed, “The Mines of Moria” could have meant anything. For a single set there’s so much to choose from. An entire wave of sets could conceivably be based on the place. Naturally, I was intrigued and decided that even if I didn’t collect the entire line, 9473 The Mines of Moria was a set I was going to pick up. Now that time has come to pass and for a set that could have been so much, it’s hard to believe it’s so little. 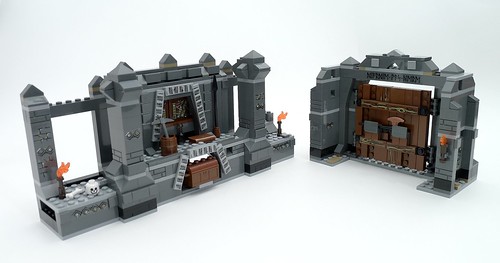 The bulk of the set is made up of two structures. A wall and a doorway. These structures qualify as 1/3 of a room. Barely. I’ll hand it to LEGO, though. What is here is nice and detailed, possibly more detailed than it needs to be. I’d give up some of that detail, brought to you pieces ranging from the popular 1x1 “cheese” slope, to the new 1x2 “brick” brick, for another wall. Or not, I'm conflicted. 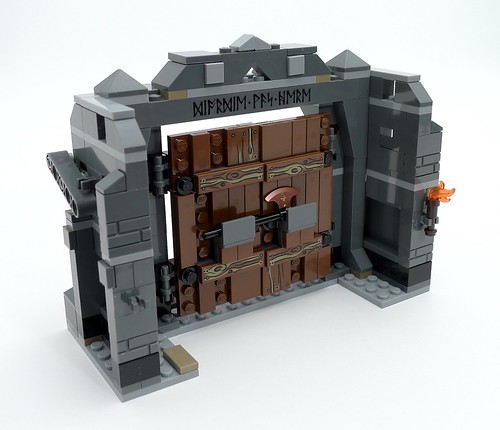 Each structure includes a few play features and plenty of interactivity. For the doorway, other than the obvious opening door, the wall next to the door is destructible. I don’t recall if this is movie accurate or not, but the room in the film did get it pretty hard once that cranky cave troll showed up. Anyone wanting to simulate that destruction is going to have a groovy time with this set. 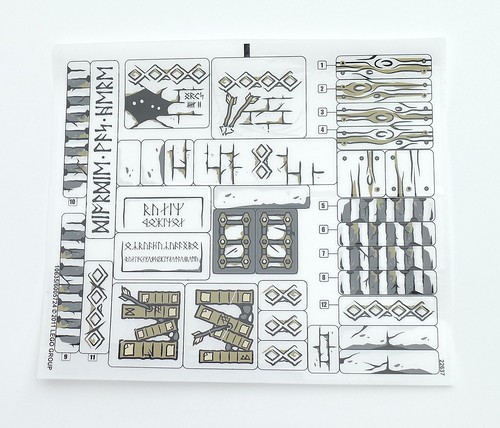 want to go back to the “detail” of this set for a moment. Each portion contains a good amount of detail, but why go to all that trouble only to cover everything in an insane amount of stickers? There are 34 stickers. I consider none of them critical, except, maybe, the text. But that’s a strong maybe, since that text is unreadable by the vast majority of people who may pick up this set and don’t want to put in the time to do an internet search. 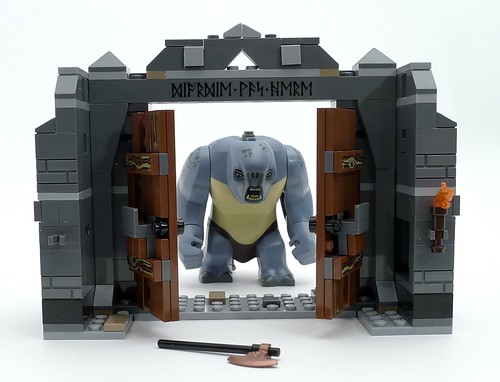 Another concern I have with the amount of small pieces are the literal handful that don't contribute anything meaningful. Some a scattered on plates as rubble, or on walls as stonework, and that’s fine, but what isn’t fine are the pieces hidden in the walls or deep in some recess. I’ve complained about part padding in the past, the inclusion of pieces that are superfluous, that don’t add to the aesthetics or practical structure of the set, and are easily replaced by a fewer number of alternative pieces. There are several cases of part padding here and I’m wondering why.

There are a few cases where it’s excusable, since a part’s inclusion was efficient from a packaging logistics standpoint, but if you look at the design of the structures, you’ll notice the alternating brick/plate layering. Most of it seemed a poor use of pieces, particularly of plates. During the building process, I felt large portions of the base structure in both the wall and the doorway could have been built with fewer pieces, while maintaining the overall look.

I do appreciate LEGO’s effort to recreate the specific scene in Fellowship, when our heroes get cornered in a room, which I believe is the Chamber of Mazarbul, a more fitting name for the set. The room doesn’t have much to do with mining, but serves as an archive and a tomb. You can tell by the handy stickers with book spines printed on them, and the two books, one of which, yes, has stickers on it. 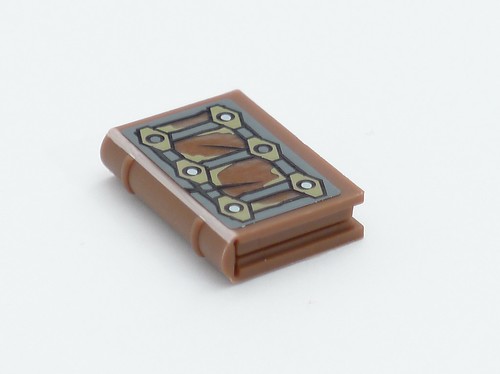 The stickered book, judging by the design, is supposed to be the Book of Mazarbul. It’s another great detail of the set. 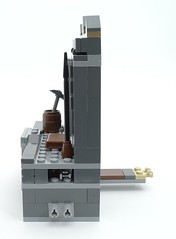 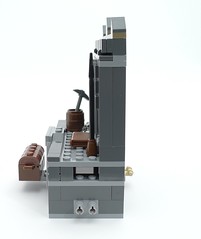 There’s a sliding treasure chest for some reason. I don’t recall it from the film, but it’s another play feature and gives this section of wall something to do, since it feels inadequate stuck between two platforms with cooler play features. 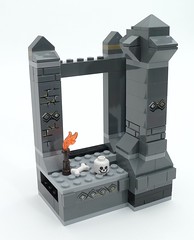 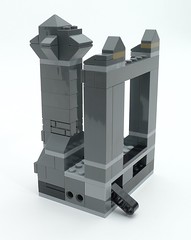 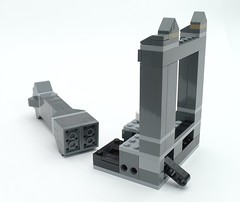 That’s right, more destruction. Tap the Technic liftarm and create your own alternate version of the scene where Pippin gets turned into Hobbit jelly. This play feature, like the destructible doorway, works well. If anything, the pillars lack dramatic collapse. They just sort of fall over. 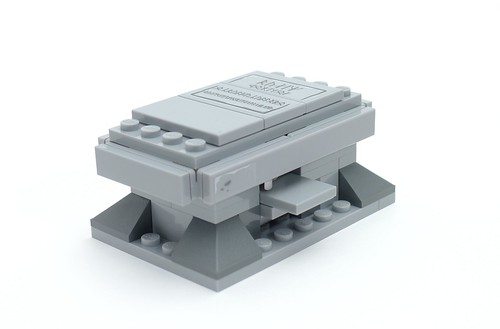 What doesn’t work is Balin’s Tomb. Aesthetically, the tomb is top notch. It’s the best place for a dead minifigure LEGO has ever produced, with various examples from Harry Potter, Indiana Jones, Adventurers, and Monster Fighters coming to mind. However, Balin, or who I’m
assuming is supposed to be Balin, is depicted as a full-sized minifigure, not a dwarf.

And that’s fine, since I can’t think of a practical fix for stubby skeleton legs. The real issue with the tomb is its play feature. According to the instructions, it’s supposed to pop open when a tile is pressed when Balin’s inside. That didn’t happen. It’s very anti-climactic. I had to simulate the experience in the review images. Luckily, it’s made of LEGO and fixable in 3.5 seconds. Still, it could’ve worked out of the box. Also, as an aside, it should be interesting to see if LEGO produces a “living” Balin minifigure for The Hobbit sets. How many minifigures have dead versions of themselves? That’s some pretty epic stuff. 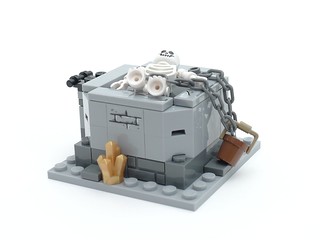 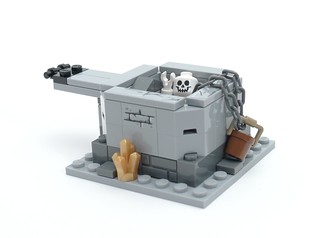 Rounding out the structures is the well that served as the trigger for the scene’s conflict. The well contains an appropriate play feature allowing builders to recreate the tense moment. It won’t be tense here, since the skeleton only drops 3 centimeters, but at least the simple mechanism works.

In the film, there are a lot of characters present in the chamber, so it makes perfect sense that LEGO would have to give most of them the axe to reduce costs. I haven’t watched the film in a while, but if I’m recalling it correctly, LEGO’s choices are suitable. Each of these characters, Pippin, Gimli, Legolas, and Borormir, did something vaguely memorable in the scene, while the Moria orcs provided plenty of soft, fleshy material to hack away at. The new olive green color is used well to depict the skin-tone of these guys. Like other minifigures with unusual skin color, their hands get left out. Were they wearing gloves in the film? I’d rather have the olive green hands over the included grey if only because I don’t have any and I’ll take any chance I can to get more of this great new color. If the Gamorrean guards from 9516 Jabba’s Palace can have properly colored hands, so can the orcs.

Like most of the minifigures of late, the Moria orcs have double-side head printing. The differences are very subtle to the point of pointlessness. Their armor printing is sweet, though. Shame they’re stuck with generic legs.

I both like and dislike Boromir. He has excellent torso and leg printing, his hair color works, but his face, ugh. It’s the worst of the set and perhaps a contender for worst of the entire theme in terms of character resemblance. Independently, say as a random background character, the facial pattern is fine, but as Boromir, it’s unrecognizable. It’s possible the likeness had to be altered for licensing reasons, but, man, I really wanted a Sean Bean minifigure. One does not simply make a Sean Bean minifigure. Sorry, I couldn’t resist.

What do you call Legolas without his quiver? Quiverlas. Ok, that was a bad joke I just made up, but it’s true and completely illogical. Legolas is practically married to his quiver. It’s like if Hawkeye from The Avengers sets… Wait. What’s the deal? Where have all the quivers gone? How’s an archer supposed to be an archer without a quiver? At least Hawkeye has something resembling a quiver printed on his back. That would’ve been acceptable in Legolas’s case, since he has illustrious, golden hair flowing down his back. Other than this unfortunate omission, the only other issue I have with Legolas is his masculinity. He has a bit too much. The cheek lines on his face need to be toned down or removed.

Gimli is the only minifigure not exclusive to this set (currently). Of course, the only other set he appears in is $130. His features are difficult to judge since he’s sporting a massive beard and helmet. I find it funny that he has two facial expressions, neither of which you can see anyway. It’s not useful here, but once you remove Gimli’s head from the context of this set or any of the LotR sets, its usefulness increases.

I can see Pippin being useful outside of the LotR sets as well. His torso printing is my favorite of the set. I imagine its usefulness can and will extend beyond the theme into anything. It’s one of the few really versatile prints. As is his face. While it doesn’t capture the actor nearly as well as the Frodo minifigure, the expressions here work well and remind us of the trouble the character always seems to find himself in. 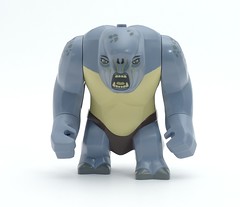 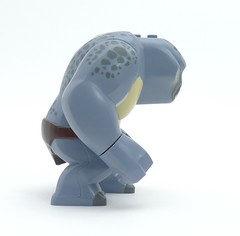 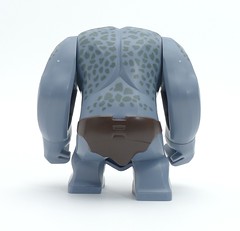 The cave troll is one big fella. In fact, he’s so big, he has a hard time standing. This figure isn’t as well balanced as past jumbo figures. His arms and hands (and head) stick out just far enough to create an imbalance, so you have to frequently tweak them to find a sweet spot. And don’t expect him to hold his club in very many positions. I’ve only found one that works and as you can tell by the images, that position is “back.” 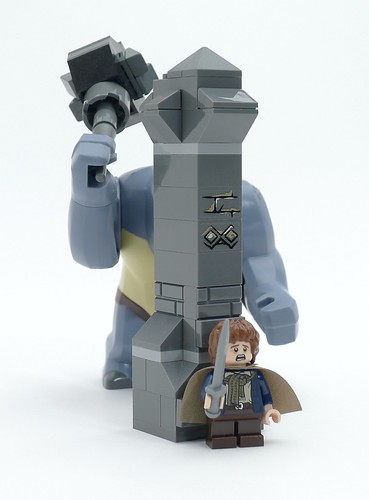 Pros:
+This set is detailed, more than your average LEGO set.
+Plenty of play features. Each section does something, some better than others.
+Good minifigure selection. Everyone included makes sense in the context of the overall scene.
+Minifigures and cave troll look great despite a few minor flaws.
+A variety of weapons. It’s like an $80 battle pack.

Cons:
-Could there be any more stickers?
-Deceptively small set, especially for $80.
-Feels incomplete, like part of a playset, rather than a complete kit.
-Cave troll can only stand in a few poses without the risk of toppling.

Verdict:
9473 The Mines of Moria captures the particular scene from the Fellowship well, but beyond that, it’s usefulness is limited. It’s a tiny slice of the mines and one that fails to evoke the grandeur of the film’s setpiece. It does contain a portion of the Fellowship you can’t get elsewhere, but time will likely fix that. As much as I don’t want to say it, this is a set you buy for the minifigures with the intention of completing the Fellowship. If that’s your goal, I suggest either waiting for these minifigures to show up in other sets or obtaining them through other means. 9473 is a set for the most ardent fans of LEGO and LotR, completionists who have the money and the space.

you think they are thinking of creating an expansion pack for this particular set ...another wall/room to add on to it ..?? if it seems incomplete they may do that.....they've done it in the past

Awwww...thats a shame ..it would have made it so much more

thing is that it wouldn't make business sense

is there a toysrus near you; cause of that you might want to stock up on the shirtless darth maul minifigs(they cost $5 but sell for easily twice that online)

yup ..there is one not to far from me ...about 30 mins city travel time
I'll look into it ...I should be going that way either this week or next

well stock up on as many as you can get(keep one for yourself though if you plan on selling them though)
the minifig:

i haz 5; i only have one open though

thats lucky? it only set me back $25; thats far less than most of the sets in my collection cost