Loki's Comsmic Cube Escape is one of two $20 sets in the Marvel half of the LEGO Super Heroes line, and the only one that's tied to the movie. The other one is the Wolverine's Chopper Battle set, which, while delicious in it's own right, is much more comic-inspired than movie-driven, so it looks quite a bit different from the Avenger's line. And the first impression is that at $20, this set could be a steal...

I know, I couldn't even keep that act up for a full paragraph. Yes, I'm known to be particularly hard on sets. In part, it's because I like being critical, but it's also because I believe in being honest. That's why I hate going to LEGO Shop@Home and seeing all the reviews, which are basically between 4.3 and 4.8 most of the time. I can think of only one time I've seen a lower score, when the flexi-tracks came out for trains. Things like that are just worthless, because it doesn't tell you if something is good or not. You don't have to agree with everything (or really anything) I say, but when you're done reading, hopefully you can look at a set with a bit more of a critical eye.

That being said, I really like this set. My first impression was fairly close, it's a good little set. I know it might sound wrong, but I think this is actually the better value at the $20 line than any other Superheroes set, but it's close. As it sits, the $20 price point in this line has been absolutely great. I mean, we first got my favorite set out of the DC side, the Superman vs. Lex Luthor vs. Wonder Woman thing. That thing was worth the money for Superman's hairpiece, for crying out loud.

Then, with Marvel, we got this set and the aforementioned Wolverine's Chopper; and when you make a set where Wolverine is the weakest figure (but still great, assuming you can overlook the claws and mouth gap), that's saying something. I don't get LEGO a whole lot of credit, but this line and the price points have been great. More than that, this set gives us a brand new type of part, introduced with this line, and it is awesome.

Not to say everything is just perfect in it. The first problem is in the minifigs, but not with the minifigs. The biggest issue I can identify right away is that we have a set with Loki that doesn't include Thor. Maybe it makes sense in the movie, but I could easily have seen swapping out Iron Man in this set for Thor instead, and putting him in the Hellicarrier escape instead. Hawkeye sort of has to be here, simply because he's the only one other than Black Widow that would have a need of vehicle.

First up, let's cover Iron Man. And let's just glaze over the fact that his head is Ted Danson huge... that's a horse that's been beaten to death. There are actually two different Iron Man figures, one with the triangle and the other with a circle on the front for the power source. I'm kind of curious about that, since it was basically the whole plot of Iron Man 2 setting up the change to the triangle. 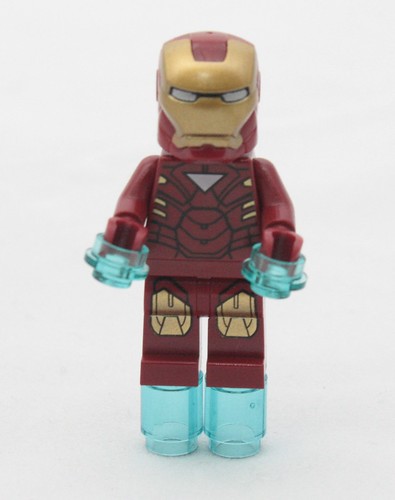 Okay, I'm going to beat the dead horse a little. It's comically large, and should have been done like the Toy Faire one, but while the front looks bad, the back looks even worse. That being said, the printing looks great. The use of trans-blue works for the whole rockets thing, but it does make him quite a bit less stable.

A really weird thing about Iron Man though? He looks just fine if you raise the mask. It's a nice feature, one they could only do with the oversized helmet. It would have looked better with a different head for it being up, but find a way to display him like this and it works. We also get an alt-face... but what Iron Man could really use is some Tony Stark Hair when you decide to shut off giant head mode. 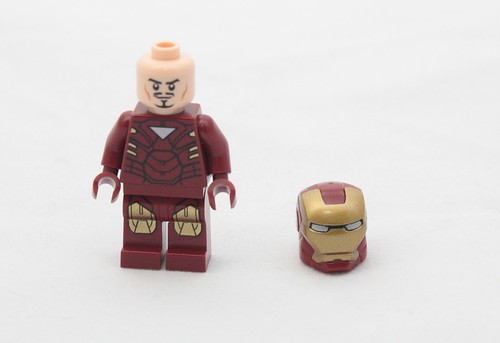 Next up, we have Hawkeye, otherwise known as the Aquaman of the DC universe. Okay, he's not as bad as Aquaman, but had anyone really cared about Hawkeye before now? I get that he was part of the Avengers, but come on, the Justice League had the Green Arrow... okay, bad example. Comic book does rock that purple costume, and had a promenent role in the House of M, so I guess there's that. 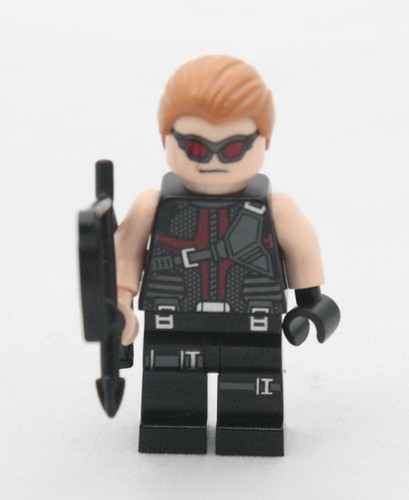 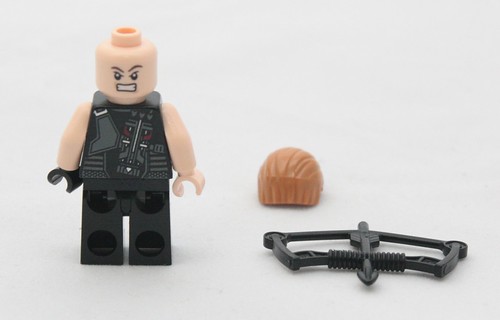 He's not a bad looking figure, but comes off as generic as his character probably will be in the movie. A great torso to reuse for other space or modern type stuff, and I'll always welcome more fleshy arms. I wish the mouths were swapped between the different sides, but that's me. The bow is accurate to the cameo in Thor, and probably to Avenger's too. The hair is nice, but I have a thing for red/orange hair, otherwise known as the color the gods give to the best humans among us.

Last up, the namesake of the set, Loki, taking off with what I guess is the cosmic cube that the end of Thor set up for us. 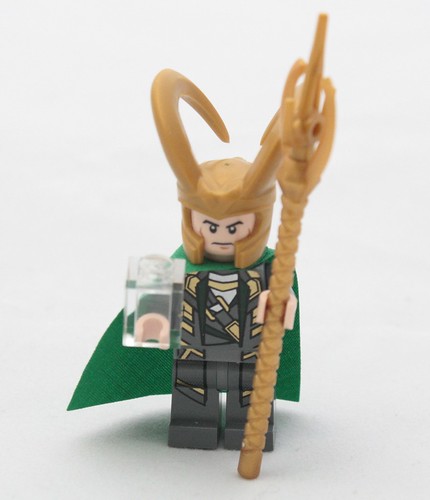 Now Loki is just absolutely spot-on, and the movie did a great job of capturing the trickster god. You just have to love that helmet. His staff is two pieces, a staff from Pharaoh's Quest and a sai from Ninjago, and it works out fairly well. No alt face on him, but you get a green cape , so there is that.

And like I said, what this set really needs is Thor. Sadly, we only get him in the two most expensive sets in the line, and once they're reviewed, I'm sure you'll learn what I know, that he's the best figure in the entire series. I would have loved to see him in this set... thinking Loki, Thor, and Hawkeye would have just pushed this over the edge into awesome.

And that's... wait, there's a truck in this set too? How about that, it actually looks to be the main focus of the entire thing. 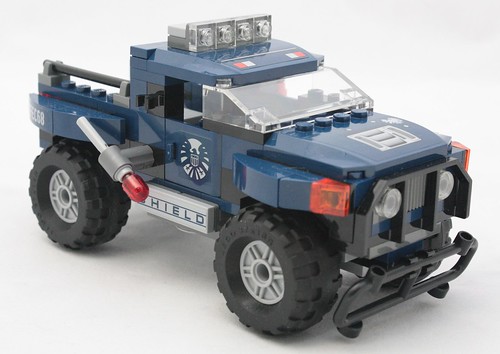 You know, that thing isn't half bad. You'd think it'd have everything against it... stickers, flick fires, and the launcher system in the bed. It's not comically oversized like the Pizza Planet truck was in the Toy Story line (it was still cool, but too large to use in other scenes). It hits the perfect mark for being swooshable, or playable, as it were. 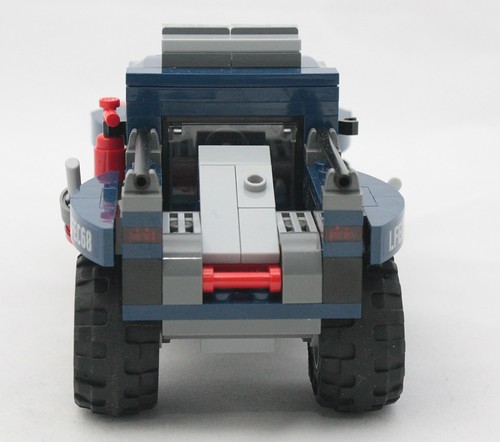 Some elements on this were done really well. The front, obviously, with the pretty innovative use of the gate/fence as a lower grill and ram, and of course, some more round 1x1 tiles are always welcome. The lights across the top are a great touch, and the bed rails are just crazy nice. The launcher on the back doesn't really launch anything, but it feels like a minor quibble in the end. 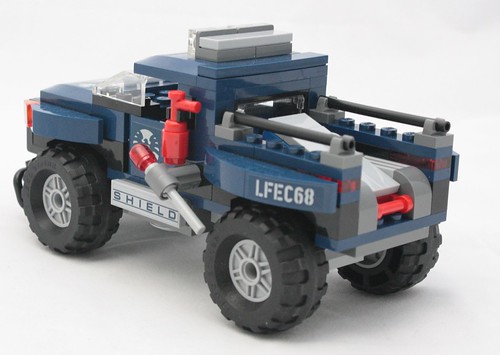 Yes, it has stickers, but this is the type of set that I'm okay with. They're used well, markers on tiles and accents, as well as the door for the S.H.E.I.L.D. logo. They don't stick out, and meld well. And if you take them off, the truck still looks just fine. Also, what the heck is that red thing? A fire extinguisher? I'm very curious about it in the movie, because it's in the Hellicarrier Escape too, placed prominently in the playset.

This thing is also the perfect size to drop into a city scene, with a bit of MOC-work. Sure, it's huge compared to most LEGO cars and what not, but doesn't look out of place at all if you add some trucks. Take off the flick fires, add some mirrors, remove the stickers and put the launcher thing down into just a truck bed, and this is a good city truck. 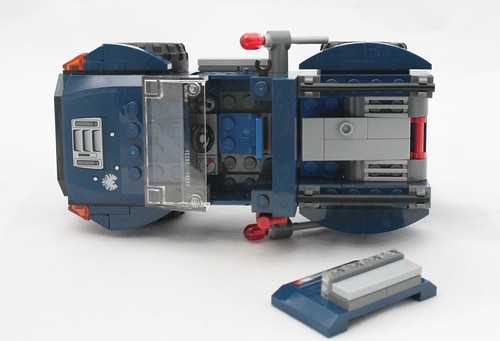 Oh, and of course, you have to fix the problem that all LEGO vehicles seem to have... passenger room. Sure, you can really stretch your arms, but you're always driving alone. The truck is wide enough that there has to be a way to address it, but I haven't taken the time to figure out what the fix is. Also, blue is ugly for the seats, I'd swap in some brown or black. Or better yet, dark grey.

All-in-all, it's a good little set. Simple in some respects, with new minifigs, and it has a lot of play-potential for kids. The new 1x2 inverted brackets are awesome, and I'm sure we're going to see a flood of the other parts hit the market as people (like me) buy up the set for them. But maybe not, cause dark blue is cool too.

$20 is the perfect price-point for a set like this

Truck is solid and would be fun to play with, and with some minor mods, can drop right into other themes.

Loki is spot on, Hawkeye is a good fig even if bland

PS: i know i put the lower guard on the front upside down

heheheh...I guess in doing that ...just proved your human like me ....

not bad looking either ..nice truck
figs are nice .... I just love Loki ...but yeah would have been nice to see Thor in this set ....

the pricing is good .....
as for iron-man ....hummm ..maybe they should just put him several different heads ...normal with hair ...a helmet on closed and way smaller..then the bobble head version for the visor-up mode....

thats too bad ...then it would be nice to put in a totally alternate head into any set with him ..or make it a points item and only online/mail order...

uuhuummm ..it would...they should do a special collectors mini-fig set ....

that would be nice; i could then make a UCS type MOC of his garage then with the armor wall