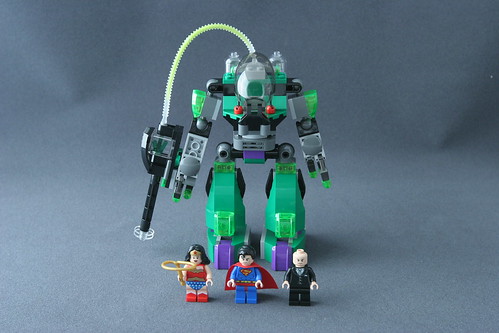 As far as the DC portion of the LEGO Super Heroes line goes, this is the flagship set to get. 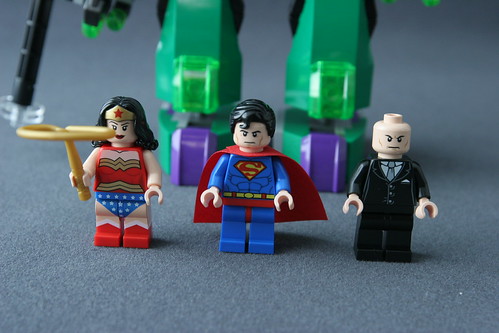 Weighing in at 207 pieces, the set’s MSRP is $19.99, hitting that golden ratio that seems to be harder and harder to come by these days, licensed theme or not. You get three fantastic minifigs on top of that: Superman, Wonder Woman, and Superman’s arch nemesis, Lex Luthor.

Superman has his signature spit curl hair piece adorning a double sided head. I’m glad they didn’t go with a smirk or smiley face, both expressions are serious with one baring an open mouth grimaced look. He features back printing which is pretty standard these days. Even though you won’t see it, it was nice that it was included.

Wonder Woman’s hair piece has a printed tiara and is curly in the back. I suppose there wasn’t any other way to feature it but how cool would it have been if it were removable for some nifty boomerang action? Still it looks great on top of her double sided head. One has an angry expression, the other a bit of a smirk. She too features back printing on a red torso. Her torso has printing on a red torso instead of what I thought would have been printing on a flesh-colored one. I think having the latter would have looked a bit more accurate to the character with only the lower half of the sides of the torso under the arms being the wrong color. Instead, what we get is a torso having the upper half of the sides and the top being inaccurate which is a lot more noticeable. It’s not really much of a complaint or a negative mark in the least, just wishful thinking on my part. Moving on, the printed blue hip element is perfect. The legs are red with printing, and I think this is the best solution for this piece because had it been flesh with printing, there would have been issues with the tops of the toes so I’d leave the legs alone as is.

Her Lasso of Truth is comically short. It is a new element and it is in pearl gold making the color accurate, but I was kind of hoping it would have been the old Western style lassos instead. I guess Wonder Woman’s real strength of being a super heroine is her hand to hand combat skills since she doesn’t have a boomerang to throw at a bad guy or a long enough lasso to loop around anything more than an arms length away. Yes, I sound annoyed but I’m not, just an attempt to be funny. Despite that, LEGO did an excellent job with her and I couldn’t be happier.

Lex Luthor is as simple as can be. Black suit, bald head, not much else to really point out. 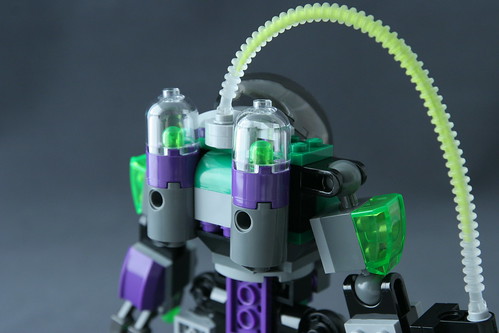 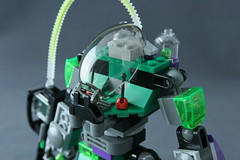 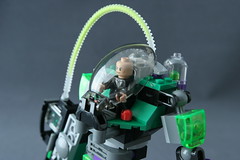 If you’ve ever built a LEGO mech set, like some of the Exo-Force sets, or specifically Power Miners 8957 Magma Mech, the Power Armor mech isn’t much different. There’s no knee articulation, nor mid thigh rotation either. There are ball joints on the shoulders, elbows, hips, and ankles. The hips are the only ones that have the ratchet joint. The feet are ugly as sin but standard for a LEGO designed mech. The way it appears on the box art, I was under the impression that the canopy piece was trans-clear in color, but it is trans-black. The back of the mech shows two cylinders with kryptonite which I assume powers the mech and the gun that’s held in the right hand. The gun design features a chamber with a piece of kryptonie inside. It’s actually locked into the arm with a Technic axle and there’s still a grip for the hand to wrap around. It’s a great design to help the mech point the gun where you want it to since the fingers don’t provide enough clutch for a secure hold.


One thing that should be noted is that the ball joints seemed much looser than ones used in previous sets. Not owning a single Hero Factory set, I don’t know if it’s a design change that’s more prevalent or if this is just an isolated incident with the copy that I have or for the set itself. The few Bionicle sets I’ve owned, the ball joints were much stiffer. I wouldn’t be surprised if this was a permanent change to help little kids assemble the joints with less force much like how the tolerances of the lever base were changed. They’re not so loose that they can’t sustain a pose. However, the ankle joints will buckle far more easily than what I am used to with previous ball joints. I wasn’t attempting any extreme poses either, and this is where a knee joint would have come in real handy to help distribute the center of gravity back between the feet. Despite the loose ankles, you can still pull off some pretty awesome poses. It’s inherent playability as a giant action figure isn’t lost in the least and kids and adult alike will really dig this set.

Other than the mech and the minifigs, you also get a comic book showcasing some of the other sets as well as telling a short story of the set the book was included in. There’s no words or dialog. Since every set in the line up is a good guy vs. bad guy set, the comic depends on the artwork to tell the story of the super heroes overcoming the villains.

What I liked: Everything. You get three fantastic, unique minifigs that so far don’t appear to be in any other set. The mech design The price is perfect for the number of pieces that are in the box. And it makes a pretty nice parts pack as well and wouldn’t be too bad for a parts draft.

What I disliked: There’s only one thing about the set that I have issue with but to be fair it’s not really an issue with the set itself, it’s how improbable the scene portrayed on the box art is. It’s not too much of a stretch of the imagination to assume that the Power Armor mech suit that Lex dons would be powered by kryptonite, or maybe even have kryptonite armor plates; he is Superman’s arch nemesis after all. So how in the world would Superman be able to rescue anyone let alone Wonder Woman being held captive by the mech? He gets weak just getting near the stuff. If anything, it should be Wonder Woman coming to the rescue of Superman. Now THAT is a scenario I can really get behind. Must the minifigs play their gender role stereotypes? Does Wonder Woman really have to play the damsel in distress? They might as well have tied her down to some train tracks. It’s just an unlikely scenario that shows how little thought and care went into creating a comic factual scene. This is how the set should have been presented: 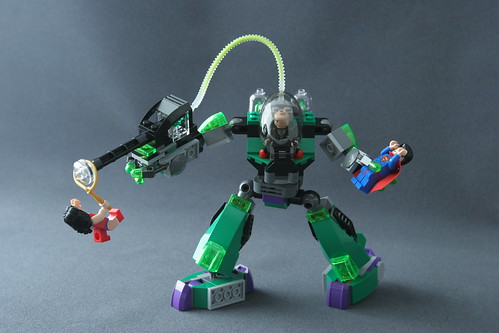 Verdict: Rant aside, it’s a GREAT set not only for the minifigs but the parts selection as well.

nice superman! ......looks kinda fun to play with
I feel bad for wonder woman though ...looks like she's going to go hand line fishing that catch crooks with that lasso ...but yeah ...she has a very well done body!

a nice simple set with alot of play hours to it yup-yup!

are you going to get one?

why dont you try to get some $$ and buy one

hell no ...those are so cool to read and look at ..plus it gives me an idea whats out there

oh check the chat; i put up all of the superheros set names for 2013 that were announced(no pics; though you already saw 2 of those sets earlier)

is it wrong that im making a army of iron men

i have 2 doc ocs from the spiderman 2 sets; i really would hate to have more than 3(there is a new spiderman set out that has one in it that im considering getting)

I would have nightmares ..."the attack of the octopii men" ~shudder~

they wont use their tentacles on you; only on females