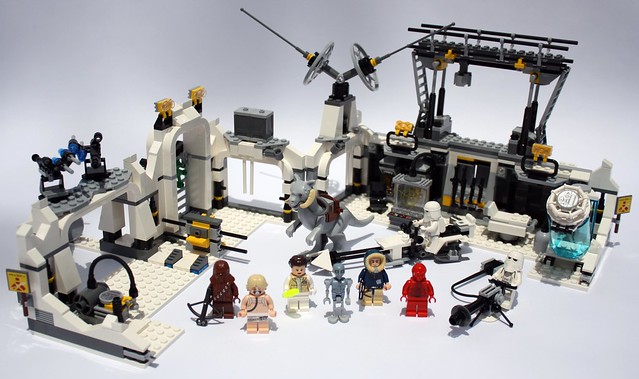 Empire Strikes Back, and Hoth in general, has always been a somewhat neglected area of the LEGO Star Wars line until recent years. But, starting with the somewhat infamous Hoth Rebel Base back in 2007 (has it really been that long?), the Ice Planet has been getting a little more love. The new base is the 3rd in a line of successive “bases” (2009′s 7749 – Echo Base would be the other), and is the first one that actually looks like a base.

At first glance, there’s a whole lot to love about this set. There is a gaggle of minifigs, almost all of them new or modified (our stalward Snowtroopers, thankfully, are unchanged). A lot of potential play features, and of course, a Tauntaun. Now the real question is, does all of that add up to $90, the same amount as the new Podracer set?

The problem with doing this review is that it was almost impossible to do without comparing it to the Podracer set, mostly because they are the exact same price point, right next to each other on the shelf, and carry similar piece counts. But once is a playset, the other a couple of ships, so even looking at the boxes can be a bit deceiving.

We do get a whole mess of minifigs in this set, eight total, plus the Tauntaun. The usual suspects are here… Luke, Leia, Han, Chewie. Strangely missing are C3PO and R2-D2, but those are relatively easy to pick up these days (or, if like me, you’ve been collecting for years, you have a whole bunch of them). We do get a couple of droids, R-3PO, a red protocol droid, and the 2-1B Medical Droid. There are also the pair of Snowtroopers I mentioned before.

The core of the set is Echo Base itself, or at least the little playset we’re given. This is a playset, obviously, so we’re not going to expect something like the amazing MOCs that were on display on Brickworld. What we get is a good sized section, about the same size as the Endor Bunker, that is hinged and can be split into a couple of different configurations.It does come with a movable dish on top, which isn’t all that special.

The hinge works fairly well, though the connector could be a little bigger or better locking. It’s not that it’s bad, it’s just one-stud, and doesn’t hold with much tension. I would have rather seen this set up with a double-clip.

There are five sections to the playset: Medical Room, Command Room, tauntaun gate, and the hanger/arch opening (I assume it’s a hanger, though too small for a snow speeder.

The hanger section is fairly basic, but has some nifty accents that really up it’s value. I’m not exactly sure what this section is overall, but it seems like it should open to the larger hanger, or maybe a snowspeeder should be parked in there.There’s a small motor or some kind of tool (vacuum for the snowspeeders?), a pair of turrets on top of the arch, a simple gun on a long portion, and even a (stickered) sign.

The tauntaun stable (At least according to the LEGO description), is pretty basic as well. Some nice staggering on wedges, and to the side, what they call Icicle traps. By trap, there’s a pin you slide out and a couple of bars fall. Why you’d put that trap next to the stables, I have no idea. But you do get a couple of crates in black to put on top of the trap. Because when I want field rations, I want them smelling of tauntaun and well chilled.

he command area has a bit more going on. We have a terminal screen (stickers, same as the hoth base), two consoles against the wall (stickers on each one), and a weapons rack. There’s also an icicle trap next to it, because that will stop the snowtroopers.

Next to the command section, we have the medical room with a bed and bacta tank. Yeah, this section just sort of speaks for itself. One tip, when you put your Luke in there, make sure you actually stick him down to the bottom studs. If he’s left loose, he will fall forward and get stuck, meaning you have to pull apart the tank to get him out.

The last section, which I’ll call the scaffolding, LEGO calls a “working cargo crane.” By crane, they mean that round brick on the bottom, I think. What is cool about it is the use of friction bars to raise and lower the walkway. A very nice touch that comes early on in the building process. The whole thing is removable, so you can place it as need be. And that is the whole set. It’s hard to peg. It certainly feels like you get your money’s worth in the set, there is plenty going on. As a playset, it’s pretty good. Not quite as fragile and break-a-part as Endor Base was, and it certainly looks far more about the base than any of the other sets. But at the same time, it’s not that flashy of a set. It’s solid with a lot of features, but not as cool looking as others. You get a good variety of minifigs, with some new varieties, and plenty of things for them to do. But at the same time, the stickers are a bit overused (especially in the command area), but you can get around that.

The build itself can be a little frustrating at times. Once it’s all together, it’s fine, but there were a few times I had to rebuild a part just because the arches were popping off or other parts slipping out. The best description I could give for the set is that it’s above average, but not the knockout the podracer set was. It’s a good set that might have been released at the wrong time, with too many other big dollar sets competing with it. Which is kind of a shame.

Verdict: Buy for the figs, maybe when it’s on sale, and then absorb the rest of the stuff into an even bigger MOC for your base.

same here.... on both fronts