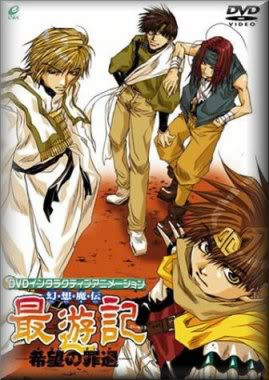 Kibou no zaika was originally interactive game. The company that released DVD, extracted only anime scenes to the DVD which caused little pause between every scene change.

Genjo Sanzo, Son Goku, Sha Gojyo and Cho Hakkai are four guys headed West to eventually, after many, many sidequests, deal with the ox king Gyu-Ma-Oh. Between fillers and one-shot villains our four protagonists are chased down by a group of sympathetic villains led by Gyu-Ma-Oh's son, Kougaiji, who could just as easily be a whiny goth poet fueled by the angst of divorced parents. Fun stuff? Hell yeah. Good characters? Bet your ass. High quality, thought-provoking material? Well...let's not get into that.

This OVA runs only 2 episodes and is rated 13+

...any problems ..please post in the "not playing" thread or PM me