Geisters : Fractions of the Earth

Geisters : Fractions of the Earth 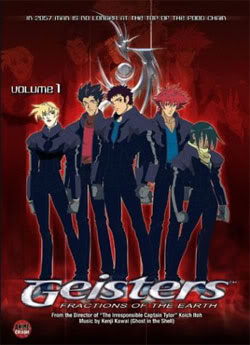 Earth: 2507 A.D.400 years ago it became certain that an asteroid would collide with Earth and the extinction of the race was at hand. Mankind spent ten years devising a plan to survive. The Dobias went out to live in space while the Shioru forged underground. 300 years ago mankind returned to the surface from beyond the stars and beneath the ground.

But the surface was not what it once was, and mankind was forced to battle for supremacy with a new life form borne from the ashes of destruction. Man was no longer at the top of the food chain. That spot was occupied by the Siliconians, creatures who roam the landscape searching for prey. Meanwhile, The Dobias, scientists and nobles, and the Shioru, farmers and nomads, are engaged in a cold war over the limited remaining resources--a cold war that threatens to turn hot.

Amidst this battle for survival of the fittest between creature and man are Dean Henos, Alcion Fama, Cris Vesta, Victor Deicius, and Shai Tanna--together they are The Geisters. The Geisters are the ultimate fighting force with powers, abilities, and weapons far beyond normal humans. They are the last best hope for mankind


This series was to have run for 26 episodes...unfortunately after 13 episodes production was stopped...not only the dubbed version but the original subbed version as well..only season 1 was done...the rest of the episodes were not produced and this series was abandoned