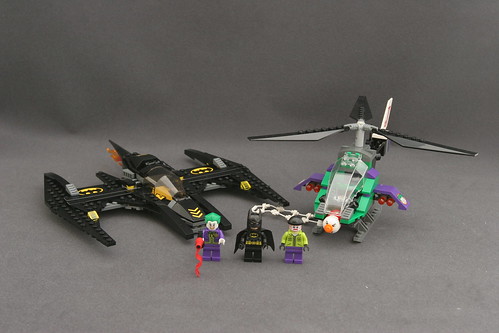 They couldn’t all be winners, could they?

Before I rant about why I don’t like it, let’s break the set down. 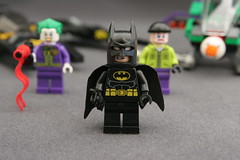 You get three minifigs in the set. Batman is the same as the one you get from 6864, so not a lot to say here that hasn’t already been said. 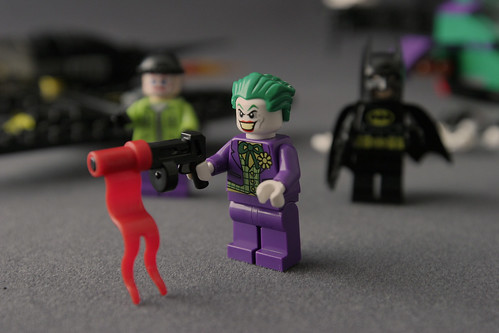 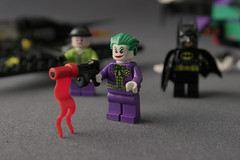 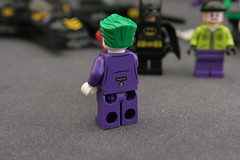 The Joker minifig is all new right down to the hair. To be exact, the hair itself in green isn’t new, but new to be used on the Joker. I preferred the old, Vampire style used previously. His face print is also new and is double sided, one showing a grin and the other a bit of an open mouth smile. It’s got the perfect, comic book slash LEGO hybrid look no matter which side you display. The purple suit has some nice detailing and also features back printing. His oversized gun interestingly enough has a flag element attached but is lacking a print or a sticker that says “Bang!” to put on it. Kind of a big detail to overlook in my opinion. 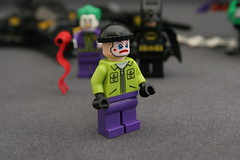 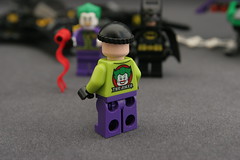 Joker’s clown goon is awesome. His face paint shows a sad, almost angry clown face and his back printing shows a Team Joker logo. It’s a shame there’s only room in the set for one goon; any self-respecting criminal needs at least two henchmen to boss around. 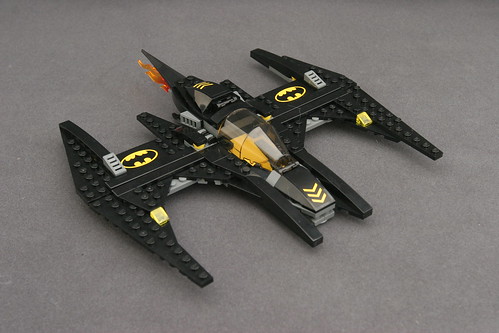 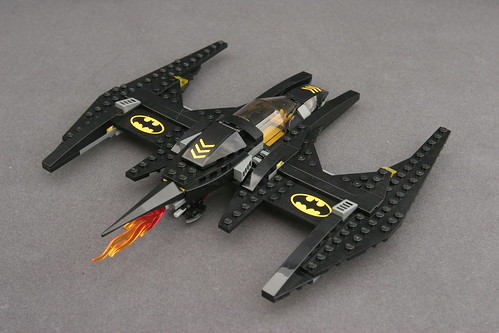 The Batwing is a disappointment to say the least. It’s a pretty flat model no matter which way you look at it. So flat in fact that when you put Batman in the cockpit, like the Batmobile, he’s practically lying down but what’s even worse is that he doesn’t rest against the slope brick used for his seat back. He barely fits and the canopy window actually holds him down. The wings split in half with the back half angling up to reveal some flick fire missiles. Had the front half angled downwards we would have been treated to a Bat-X-wing and that would have made it cooler and a bit more interesting. Other than the flick missiles, there’s a Batbomb that can be dropped by flipping open the hidden compartment and pushing down on a Technic axle, then the Batbomb just sort of pops off. 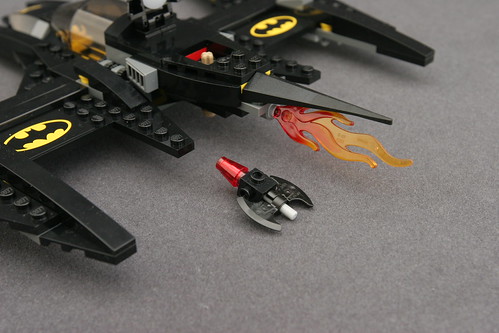 From a top-down view, the Batwing retains it’s requisite shape of a bat logo. The underside is ugly as sin. Lots of light gray detract from an otherwise stealth design approach. There’s no landing gear whatsoever. The worst part of the ship is that when the Batwing is alit, it actually rests on the Batbomb. How hard is it to throw in some landing gear? Or at least add another level of plates so that the Batwing isn’t resting on the bomb? 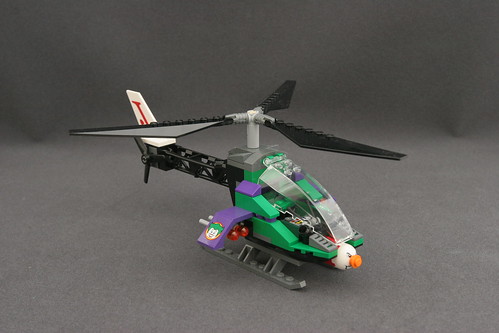 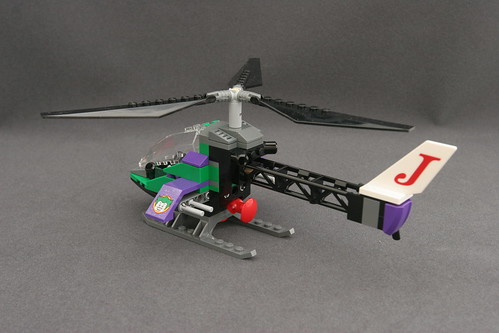 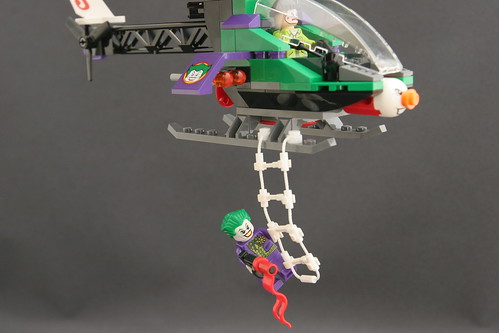 Whatever oomph the Batwing was lacking, Joker’s helicopter more than makes up for. It’s got an almost Apache-inspired design with the two pairs of flick missiles on either side of the cockpit. There’s also a smiley face flick bomb that actually works really well. The bomb is launched/dropped by pushing on a red button in the back of the helicopter. The button doesn’t take a lot of force to push, and it’s quite satisfying to see the bomb go. There’s also rope ladder that the Joker can swing on. Front to back, it’s just a solid little chopper. 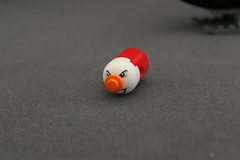 What I liked: I have an affinity for LEGO aircraft and the Joker’s helicopter was a real treat. It may not be modeled after any one particular real life equivalent, but it was still compelling enough and FUN enough to win me over. The flick bomb is also cute and works pretty well as a projectile weapon.

What I disliked: The Batwing is so ridiculously undersized and uninspired, it really makes Joker’s helicopter shine as the real star. It’s kind of puzzling if you think about it. Here is Joker’s helicopter, looking like it could go to war. And then you have the Batwing, financed by billionaire Bruce Wayne, and it looks like it could fall apart if you look at it wrong. You end up feeling cheated. It’s not just a matter of a bad price per parts ratio; even if the set were priced $30 or even as low as $25, the Batwing model would still feel cheap. I suppose the only way they could have remedied that is to increase the piece count, price the model higher, and really give us a Batwing that will blow our minds. The design we end up getting just didn’t work.

This last point may be a bit esoteric to understand but after, building the Batmobile set, this set was a bit of a let down. It’s not because the piece count was low (though the high price for the pieces you do get was a bummer) or the flimsy Batwing design, it’s just that it doesn’t feel substantial. Looking at what worked for 6864 Batmobile set, it doesn’t matter if you liked the design of the Batmobile or not, or Two-Face’s truck for that matter, they just felt balanced. Here, not so much. Maybe my preconceived notion of a jet being larger than a helicopter is unwarranted, but this set definitely has some balance issues.

Verdict: I’m torn. I really wanted to like this set, and there are a few great things about it. It feels like an overpriced Joker set, and less of a Batman one. The Joker half is certainly the best part but if it can be gotten for a discount, I wouldn’t hesitate to recommend it. At full price though, it’s a harder sell.

I also agree the bat-jet should have been a bit longer and less flat ....needs some head/leg room in it

over all I could spend a few hours at a table or on the floor playing with this ...easy!

well i think i might do a marvel set next