For most people, Darth Maul and pretty much everything he did was the highlight of Episode I. Red tattooed face? Check. Horns? Check. Double-bladed lightsaber. A million-times checked. If he would have been used in more of the movie, and had more than a couple of lines, he would have washed away the assault on our eyes and ears that was Jar-Jar Binks, but sadly, that was not the case.

What little we did see of him, outside of the very epic Lightsaber Duel, was his ship, the Sith Infiltrator. Long ago, George Lucas figured out that putting Sith in front of anything was a sure-fire way to sell merchandise. Sith Pancake Syrup? I bet there are people reading this right now that are thinking about checking Google to see if that really exists. So here we are, with LEGO testing us to see if we’re willing to fork money because they put out another Sith Infiltrator.

Well, I was. So there is that. The Sith Infiltrator is a curious ship with a LEGO history. It was one of the original release of the Star Wars license (7151 – Sith Infiltrator), where people were still wrapping their head around these new toys. Episode I, while a commercial success, was a bomb with most adults. But their kids liked it, and gobbled up merchandise like it was candy. This was a mid-range, back when the mid-range for sets was $30 (ah, memories… my wallet is crying right now), and it included Darth Maul.

Then again, while Darth Maul is quite memorable, this ship is only on screen for a couple minutes at best. And parents only had to glance around the aisle to see that there was another set, 7101 – Lightsaber Duel, that also included Darth Maul, as well as Qui-Gon Jinn, and it only cost $6. There is not a parent on earth who wouldn’t talk their kid into the cheaper set after noticing that.

More than that, this set is one of the best examples of exactly how far Star Wars LEGO has come since the line was first introduced. That thing above, while good in its day, would be laughed at as a blocky nightmare now. Only a couple tiles, very little shape, and undersized. On top of that, it had a pretty bad price-per-piece ratio (12 cents) for the day, and only came with one minifigure, Darth Maul (though it did include two lightsaber blades for him at least… Lightsaber Duel did not; sad that twelve years later, I still remember that).

Then, eight years later, we got a re-release of the set, a 7663, which gave the ship a facelift. I’ll let the picture speak if it was successful or not.

Okay, I’ll just tell you, no, not really. This wasn’t a popular set at the time. It was made to look too contoured, the slopes didn’t line up well, and it was just ugly. Of course, the nice outcome of that is that I picked up about five of these things on clearance for $15 each. What could be said about the set was that it had a good ratio of parts for the money (8 cents, don’t think anything short of UCS has come close to that since), and kept the price of the original.

Now, we’re getting another re-release of the set… 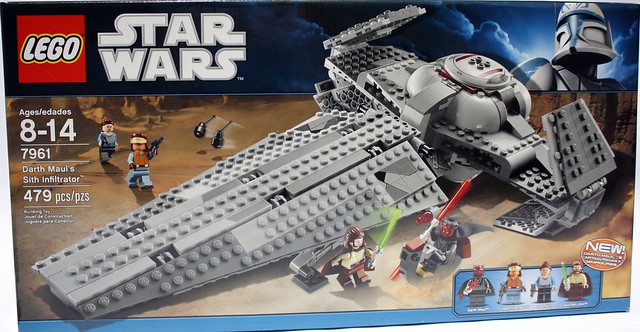 Okay, at first glance, that is just awesome. Gone is the forced curvy-ness of the 2007 ship, and the blocky-ness of the original. It looks quite like the ship, it comes with four brand new minifigures, and looks to include some nice parts. And then you see the price tag… $70. At first, you won’t want to believe it, because you see the amount of parts, 479, and just sort of assume it’s in the wrong spot. But, after checking the label, you see, no, this really is $70 (or $75 with the TRU tax).

LEGO apparently really wants to see if the word “Sith” will sell anything.

Starting with the minifigs, we have four new or revised figures. Captain Panaka is a welcome addition, and a glaring hole, from the Episode I lineup. This is really one of the places where having fleshy minifigs helps us, and the diversity is nice. The rest are revised… Padme, Darth Maul, and Qui-Gon Jinn are all revised, both face printings, torso, or in Maul’s case, with the addition of horns.

Qui-Gon has been given a pretty radical face lift. We’ve had a Fleshy version of him before, sort of, in 7665 – Republic Cruiser, but that was with a hood and did not include a Redish-Brown version of that glorious mullet. I’m not going to see an inflammation of old vs. new colors, but it’s always nice to be given the option. 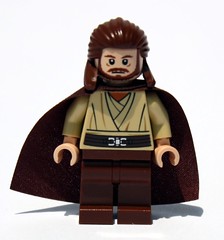 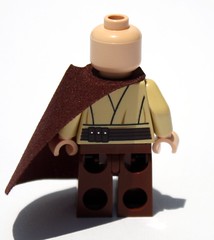 Qui-Gon has come a long way in the last twelve years. On the left, we have the hooded version from the Cruiser, on the right, one of a dozen old yellow Qui-Gons I have. New back printing on the figure and a more detailed torso (though only slightly more than the old torso). Unlike most other figs in the second-half wave, Qui-Gon does not have an alternate face. 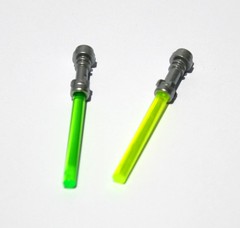 Of course, one of the first things that just leaps out at you when you look at this, or put the set together, is that we have finally gotten a true green lightsaber. Don’t get me wrong, I didn’t mind the old one, per se… it’s all we knew. But as soon as that green showed up in Atlantis, you wanted it in a lightsaber. Now we have it, and I want more. Many, many more.

Captain Panaka is fairly simple. His torso is printed on both sides, with details for grooves and what I guess is aged leather. The face is new, I believe, and only printed on one side. So sadly, he has that scared little look all the time. The hat is new, and pretty cool. I could almost see some uses for this elsewhere, but haven’t come up with what they are yet. 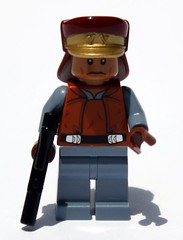 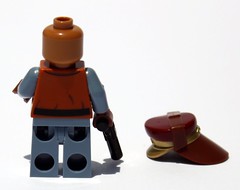 As for Padme, you almost want to sort of check and make sure she’s actually in here, and it’s not just a trick. For long time collectors, you just know that LEGO hates Padme. As one of the central characters of the PT, she has appeared in a grand total of two sets: Anakin’s Podracer and the original Podracer set. Since then, she has been in absolutely nothing. No Clone Wars sets, no Episode II or III sets, not a thing. And before you bring up the whole “boys don’t want to play with girls argument,” understand that Ahsoka has appeared in five sets, Princess Leia in more than a dozen. 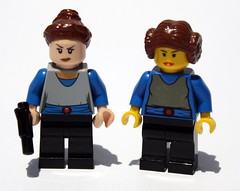 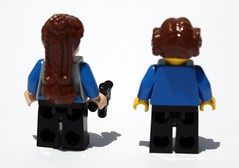 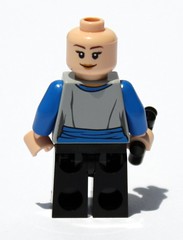 And yes, I know that my old Padme’s hair is wrong. Can’t find her hair (or even my second copy of her… probably in storage somewhere). The face is not unique, it’s the same as Hermione from the Harry Potter. Shame that Padme still can’t any love and her own face, but it does look closer than the old one does. The hair is the same as the old one, just in reddish brown.

Darth Maul has been likewise made over. The torso is a revision of the black jedi robes Maul shared with RotJ Luke. Hopefully that means an updated Luke is coming soon too. I like it, the details are still very LEGO, and it could fit almost any Jedi you put it on. 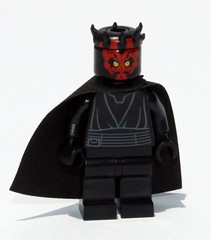 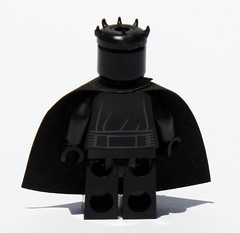 The face is all new as well, with far more prominent eyes and new tattoo print. In this case, I like the old one better. It just felt more LEGO. I’m also torn on the whole horn crown thing. It looks better than Ki-Adi Mundi’s additional headwear does, but it’s still not perfect. It also makes it feel a little less LEGO. I liked the old Darth Maul, I thought it was always one of the best done figures from the first wave. 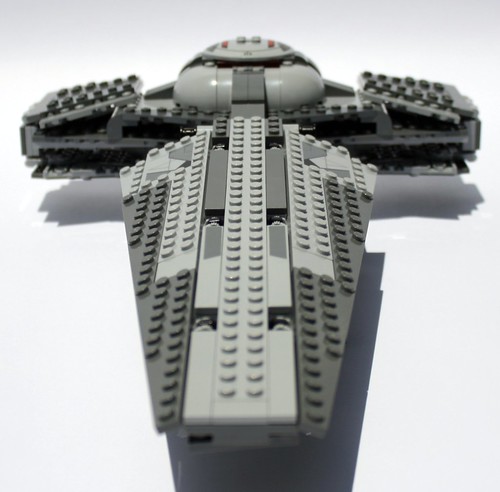 The actual Infiltrator is a far cry from the original and the last remake. First of all… this one actually looks like the Infiltrator in the movie, at least more than the other two. It’s quite a bit bigger than the other two, and that’s a good thing. The contour of the nose is just spot on, or at least it feels that way. The cockpit ball is more proportioned, though still a bit smallish. 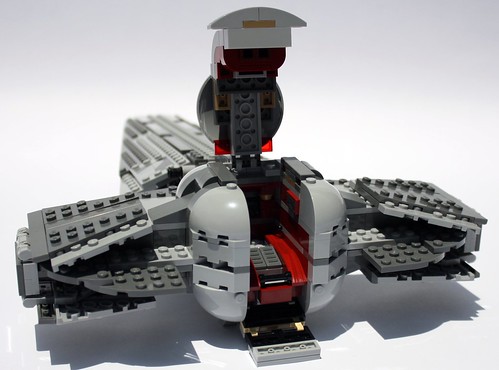 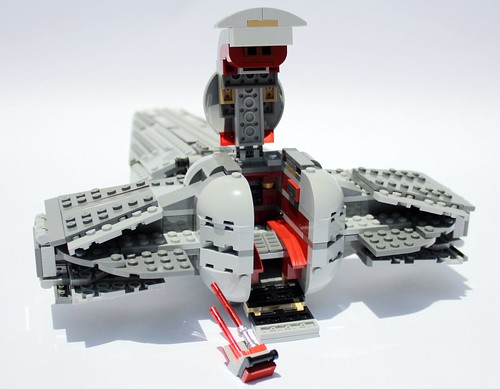 When you open the cockpit, you get a pretty nice interior, with Maul facing forward. There’s also a small section where a saber storage that slides out. It’s actually a fairly elegant way to store it without looking insanely garish (like, say, how the Jedi Starfighters just stick it in guns and what not). The hatch itself is is an extremely tight fit, and I had to wiggle it a little to get it to open and close sometimes.

The Infiltrator also uses stickers, like most other sets these days. The dish on top of the cockpit is printed, but everything else is stickered. On this set, it doesn’t look bad, in a lot of cases simply because they used a transparent backing for them. Most of the time, it’s accents, not critical pieces. Still, an occasional printed tile would be nice, especially when we’ve seen them show up in other lines lately.

One really odd things about this ship is how heavy it feels on the back of the ship. If the front was sturdier, this thing could be a club.Those dome parts weigh a bit, and most of the parts in the build are concentrated around the cockpit. The rest is a whole lot lighter by comparison. Of course… there is a reason for that. 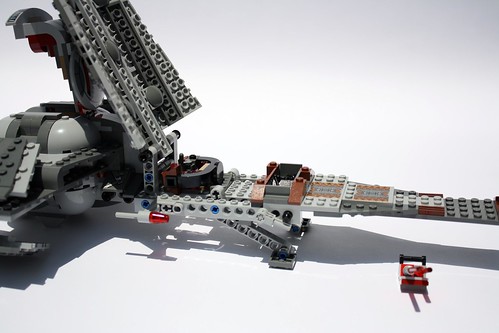 This is perhaps the most curious part of the set. The entire front hatch opens. You actually see it on the back of the set, but it’s always positioned in a way where you are looking down at it, from above, so it doesn’t look quite as sparse. All you get in here is a couple of bomb bay doors (a throwback to the original model), a place to store his speeder (which does use a double-arch, that’s kinda cool), and a couple of flick fires (again, don’t shoot out your eyes).

Flip the ship upside down and it becomes very apparent what the problem is. It basically looks like it’s missing. Between this and the Falcon, it’s like LEGO is only building ships that can be displayed. It’s still swooshable, and fairly durable, but it’s just ugly. It doesn’t feel quite right to hold, like you’re missing something. And that really highlights the underlying problem with this set. It’s $70, and you only get 471 pieces, nearly a 15 cent per piece ratio, and a lot of those are technic pins and connectors.

This is, at best, a $50 set. LEGO is getting greedy. Nothing about this set screams out that it’s tying up the money. Other sets have more minfigures, even more new minifigures. There are no new parts, and only a couple with new colors (those domes LEGO is so fond of). And that kills this whole thing. A new Padme minifigure deserved better.

Verdict: Skip it until its a reasonable price ($50 or less).

yep; unless you need a maul ASAP that is

okay ....nope no real at the moment need...perhaps in the future