Dagger of kamui/kamui no Ken 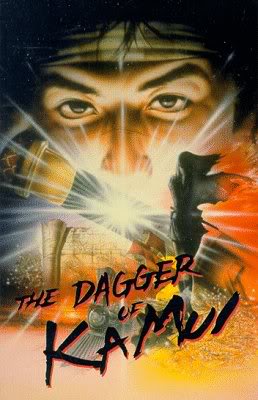 On the eve of the Meiji restoration, as a slumbering Japan awakens and turns its eyes westward, an innkeeper finds a baby named Jiro in a drifting boat; his only companion a glittering blade, the Dagger of Kamui. When Jiro is thirteen, his adoptive family is murdered and Jiro is blamed, only to be rescued by Tenkai, a priest, who trains him in the mysterious arts of the Ninja. Seeking revenge for the loss of his adoptive family, Jiro kills the mysterious one-armed Ninja who reportedly slew them.

Years later, acting on a tip from Tenkai, Jiro tracks down his real mother, only to learn that Tenkai had tasked his father with finding a clue to the lost treasure of Captain Kidd. With the treasure in hand, the Shogun will be able to retain control, and Japan will once again isolate itself from the world. However, his father fell in love, abandoned the search, and had a child -- and for this failure, Tenkai exacted a terrible revenge!

Now the chase begins, as Jiro, with only the Dagger of Kamui to help him, searches for the great treasure, a search that will take him all the way to the American Old West, with Tenkai's minions always close behind.

If Jiro can find the treasure and return to Japan, then, perhaps, Jiro can exact his revenge, and thrust the Dagger of Kamui into Tenkai's black heart!